Hot Crater is the second Zone of Sonic Advance 2. It serves as the successor of Leaf Forest and precedes Music Plant.

The whole of the Zone is set above an area that is highly active in volcanic activity. The crater itself is full to the brim with metallic pathways and machinery, and closer to the crater's bottom, the extreme heat generated causes a "wiggling" effect on the background, which appears to move in a wavy fashion. Ash-covered ledges and mountains cloaked in clouds can be seen beyond the crater's edge.

Sonic and his team arrive at Hot Crater after defeating Dr. Eggman in his EggHammerTankII in Leaf Forest.

Act 1 introduces the player to new gimmicks exclusive to the zone, including bungee hooks that launch the player upwards if grabbed onto, as well as tunnels that quickly shuttle the player around the area. Both acts of the zone take the shape of a mild downward slope to the finish; should the player take a lower path, he/she should be wary of any bottomless pits that need to be crossed.

Act 2 is largely similar in shape and mechanics to Act 1, with the addition of more bottomless pits and loop-de-loops. In consistency to Act 1, the lower paths of the act can lead into bottomless pits should the player become careless, so the higher paths are safest as long as the player minds the many Badniks that patrol the area.

The Zone's boss takes place on an endless circuit; at high speeds, the character must keep running in order to keep up with Eggman as he uses his tank to bombard the player with Egg Bombs. At certain time intervals, the vertically oscillating barrel of the tank will fire an Egg Bomb, prompting the player to jump over it if necessary. The player must Spin Jump into the tank's barrel in order to damage the tank; after four hits (three in easy mode), the barrel will be destroyed and the tank will begin to endlessly spew Egg Bombs at the player, initiating pinch mode. After Eggman takes another four (three in easy mode) hits to his contraption, the tank will burst into flames and explode, forcing Eggman to retreat. 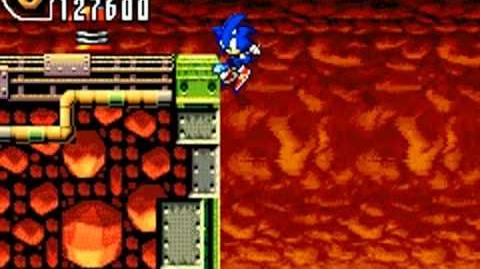