A Hornet-9 in Final Chase

The Hornet-9[1] is a robot deployed by the military organization Guardian Units of Nations in Sonic Adventure 2, and a part of the Hornet series.

It resembles the Hornet-3 and Hornet-6, but has nine bomb pods and three additional arms to hold the extra bombs. It is black and gray in color, with red on the top of each of its arms. It has blue trim around the center of its body and a yellow "eye". Emblazoned just above this eye are the GUN logo and the number 06. The bombs it fires are cone-like in shape, primarily colored black, and have red lights around the front edges.

It usually patrols an area, but will stop to arm its three bomb pods and throw them at passing enemies. Upon its destruction, it awards the player three hundred points. When playing as Tails or Eggman, the player can lock-on and shoot down its bomb pods along with the Hornet for additional points. 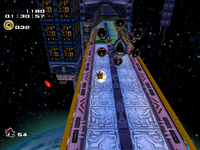 A Hornet-9.
Add a photo to this gallery