Honey Nut Cheerios is a breakfast cereal produced by General Mills. In 1994, a television commercial for Honey Nut Cheerios featured Sonic the Hedgehog alongside the cereal's usual mascot, an anthropomorphic bee named Buzz. The slogan of the advert was "Race for the taste!"

The commercial begins with Buzz playing Sonic the Hedgehog 2 on the Sega Genesis. He is then sucked into the game, specifically the Emerald Hill Zone (Act 1), where he challenges Sonic to a race for a box of Honey Nut Cheerios. Sonic gives a thumbs up, and the Sonic sound when getting a Chaos Emerald jingle can be heard.

The two race through part of the Emerald Hill Zone (with scenery taken from game footage - including a loop-de-loop and Mobius-twist), although Buzz flies in-and-out of the plane of play, into the foreground and background. At the last stretch, Buzz trips and crashes into a palm tree, and coconuts fall on his head. Sonic then leaps out of the TV screen, where a bowl of Honey Nut Cheerios is waiting. Buzz asks "Hey Sonic, how can I be as good as you?" before Sonic dashes away.

There is also a coupon in this commercial, which described an offer where you could get two free Mega Drive games  from the tip cards which uses Dr. Robotnik's Mean Bean Machine and ToeJam & Earl in Panic on Funkotron. This coupon also gave a chance to get a free Sega Mega Drive (Genesis). 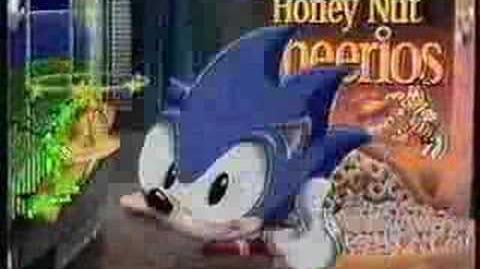 Sonic the Hedgehog in other media
Retrieved from "https://sonic.fandom.com/wiki/Honey_Nut_Cheerios?oldid=2361805"
Community content is available under CC-BY-SA unless otherwise noted.