Hit it! Parasol Ball is a minigame in the Party Mode of Sonic and the Secret Rings.

Hold the Wii Remote in a vertical position and swing to hit the parasol ball at the right moment. Use

to move your character.

Each player is given a racket to hit balls into a moving box on the other side of a short net. The objective is to hit as many balls as possible into the moving box at the given time limit of twenty seconds. Each ball descends from the sky with a parachute, giving the player enough time to set up a swing. Blue balls are worth one point each, and red balls are worth three points each. The player with the most points after each player has received two turns is the winner of the game. 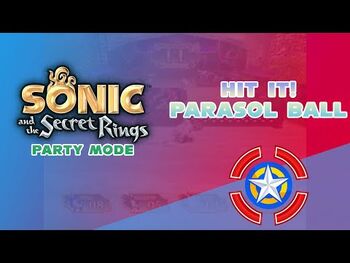