Sonic News Network
Register
Don't have an account?
Sign In
Advertisement
in: Gimmicks and obstacles, Sonic Heroes, Shadow the Hedgehog,
and 6 more

For the gimmick in the Sonic Boom series, see Hint (Sonic Boom).

The Hint Ring, from Sonic Forces.

This is a Hint Ring. If you touch it, your teammate will give you hints.

The Hint Ring[1][2] (ヒントリング, Hinto Ringu?), also known as the Navigator, is a gimmick that appears in the Sonic the Hedgehog series. It is a variation of the Hint which provides the player with additional help during gameplay.

The the design of the Hint Ring has varied over the course of the Sonic series. However, its general motif is a floating question mark surrounded by several colors.

In gameplay, the Hint Rings can be found all over the various types of stages in games. Upon touching a Hint Ring, the game provides the player with information about the surroundings, gimmicks, enemies, controls, strategies, etc. How these messages are relayed differs between games, although they are usually accompanied by a message box and/or text.

In Sonic Heroes, the Hint Rings are presented as rainbow-colored question marks, each surrounded by a ring of dots in different colors. When using a Hint Ring, one of the characters on the player's team will speak out its contents as a trialogue between the team's members (normally with subtitles).

When fighting Metal Madness, the Hint Ring on the right incorrectly makes Team Rose say that the boss will shoot fire if the player grabs his right arm, the flame-shooting one, which is not possible to do so.

In the Super Hard Mode of the game, all Hint Rings will be completely removed from every Stage with the exception of one, which can be found after reaching the second half point of Frog Forest.

In Shadow the Hedgehog, the Hint Rings are presented as white question marks, each surrounded by a multicolored sphere. When using the Hint Ring, the playable character will speak out its contents.

Like in Sonic Heroes, every character, including Shadow himself, have their own description of the information for the Hint Ring. In Shadow's case, he will talk in first person to the player, referring to himself as "I" even though it is the player who will control his actions. In the other characters' case, they will have a dialogue with Shadow. In Expert Mode, Hint Rings are only used to play good luck messages from the game's supporting characters.

In the Xbox 360/PlayStation 3 version of Sonic Unleashed, the Hint Rings are identical to how they appeared in Sonic the Hedgehog (2006), except that their question mark rotates. When using a Hint Ring, the playable character is immobilized while a text box containing information from Chip (sometimes accompanied by an illustration) appears on the screen. To continue reading or close the text box, the player must press

In some cases, the Hint Rings will vanish after using them, if the player did not use them at all.

In the Wii version of Sonic Colors, the Hint Ring is referred to as both the Navigator and Hint Ring.[2] It also appears in the remaster Sonic Colors: Ultimate. In these games, they retains the Hint Ring's design from Sonic Unleashed. When using the Navigator in this game, the screen darkens and the gameplay freezes while a textbox containing the Hint Ring info appears. These hints are read out loud by Tails. The player can skip their explanation by pressing the Jump button. After usage, the Navigator will vanish briefly before returning, except during boss battles where they cannot be used freely. When starting a New Game or in the Options Satellite, the player can choose to toggle the Hint Ring on or off, so that they do not appear in stages when toggled off.

During the battle against the Nega-Wisp Armor, a unique Navigator will give no actual description of the boss as Tails' signal to Sonic is very weak, resulting in a playback of distorted sound and text.

In the Wii U version, PC version and Nintendo 3DS version of Sonic Lost World, the Hint Rings have the same design they had in Sonic Unleashed. In the Nintendo 3DS version of the game, Hint Rings appear normally, mostly in Windy Hill Tutorial. When using a Hint Ring, the game freezes and a textbox containing the Hint Ring's contents will appear. The player can continue reading the hint or close it by pressing

In Sonic Forces, the Hint Rings have the same design and functionality they had in Sonic Unleashed. When using one, the gameplay freezes and a "Hint" textbox appears. The player can continue reading the hint or close it by pressing

. After that, the Hint Ring will disappear for a short time then return to its same place afterward.

In the game's "Option" menu, the player has to option to turn off the Hint Rings, which keeps them from appearing in the stages.

In the Sonic Boom video games, the Hint Ring appears under the name Hint. In these games, the Hints have the same appearance as their mainstream counterparts and function in the same manner. 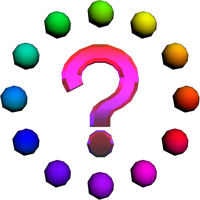 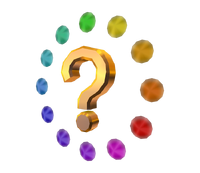