A mountainous region high above the clouds.

Lava boils from volcanoes and earthquakes shake the ground! Spring for the Rings on teeter-totters and blast through underground tunnels and caverns.

Hill Top Zone is a high mountain full of seesaws and gondolas[3] that is located high above the clouds of West Side Island. The background features a clean light blue sky, various cyan mountains with green peaks, a few orange canyons, and a thick layer of clouds at the bottom. The soil here is made of cyan stones with a geometrical pattern, with a few parts having a checkered pattern; and is covered by lime grass with green lines and some flowers, similar to Emerald Hill Zone. There are also various tall pine trees decorating the Zone.

During his hunt for the Chaos Emeralds, Dr. Robotnik would invade all of West Side Island, including Hill Top Zone, which he kidnapped the local Animals from while filling said Zone with Badniks.

Hill Top Zone soon after became the fifth Zone that Sonic and Tails would travel through to put a stop to Robotnik's operations. On their journey through the Zone, they eventually locate the doctor in the Egg Scorcher Mk II, which they have a battle against. After his vehicle is defeated, Robotnik flees, while Sonic and Tails head to Mystic Cave Zone.

Seesaws and loops are scattered throughout the Zone; while the former springs the playable characters up the mountainsides, the latter invariably sends them plummeting into the volcanic caves. The seesaws function identically to the ones in the Star Light Zone from Sonic the Hedgehog, except a glowing red sphere sits on one end instead of a spiked ball. In Act 2, lava will come from the bottom of the cavern and the player has to reach the top before getting touched by the lava.

At the edge of the cliff past the quarter-slant is a Gondola, with a trail of eight Rings and a bottomless pit below. On the other side, the player will immediately encounter a Spiker. The road meanders uphill towards another Spiker at the end of the next obstacle: a lava pit with two moving columns. Past the rock is a seesaw. If used twice, the player can jump to the left to pick up an Invincible monitor on a hidden floating island, which also has a diagonally-aligned Spring. The next lava pit with a moving column is guarded by spikes.

From here, the road becomes a tunnel which slides into an S-shape and finishes on a quarter slant. Enough speed with some slight leftwards momentum and a good landing will earn the player an Invincible monitor. Otherwise, they will hit the ceiling and will have to continue in accordance to the guide written in the paragraph below. Along that route, there is a hidden tunnel which if they will have to walk all the way across. From there, they will find a Super Ring monitor. The next floating platform to the right of the Invincible monitor has a seesaw, leading to the next island where the player will encounter a Gohla. After defeating it, the player can take the moving floating platforms to the Star Post and continue onward via the Spring.

To the right of the Spikes is another seesaw. Up there, is a Spring to the left, which takes the player past a group of Rings and over another lava pit, with the gaps between the sole column wider. Past the rock are two seesaws, followed by a yellow Spring which leads to a Super-Ring and a Gondola that leads over a lava pit. The player can jump off as soon as they land on this Gondola so that they can collect another Super Ring. A Rexon will then emerge from the lava pit and attack the playable character. The next section has two sets of spikes followed by a 3/4 loop with some breakable blocks, requiring only a Spin Dash, leading to the cavern section.

To the right is a Shield monitor, guarded by Spikes. Past the spikes on the left is a lava pit, this time with two seesaws. Beyond the rock is a ledge with a Gondola. The player must be aware of Spikers attached to ceiling. A Rexon will then appear from the next lava pit. Beyond the spikes and the rock is a right-facing Gondola, with a pit full of lava below it. At the end of the trail is an upside-down Spiker, followed by a grass pit with a red Spring and two sets of moving spikes. At the end is a hidden Spring, which the player can use to collect the thirteen Rings clumped together here. To the right of the vertical corridor is hidden section with four more Rings and an Invincible monitor, which is helpful for the next part. However, the long tunnel doors will then close behind them, and for the first time in the game, the ground (and lava) will move. The player will then encounter a simple section of short walls and a tunnel which must be cleared quickly. At the end of the platform is a gap with a moving column marked with an upside-down Spiker. The ground will them slowly open up, allowing the player to get through a tunnel that leads to a double S-bend that leads back into the open.

If the player takes the quarter-slant with enough rightwards momentum, they can collect up to twelve rings and land on top of a 3/4 loop, where there is a Star Post and a Super-Ring. Otherwise, a seesaw will take them up to the platform leading to the 3/4 loop. Beyond there is the Goal Plate.

The Act begins with the road slanting up to a wall, then meandering both ways before stumbling across a rock. The player will then encounter a lava pit and two paths. The lower path is more likely and quicker for those playing as Sonic. This path leads a tunnel with an S-bend, before opening out again. The road drops then down slants up a high wall, along of which the yellow Spring can be used. Ahead of the rock perched on top is a lava pit, split in-between by a Rexon and a moving platform. Past the following rock is a 3/4 loop with breakable blocks that open up to a double quarter slant. Beyond the next slant is a Gohla, ahead of a rock. Between the rock and the incoming slant is a ceiling Spiker. The player can then collect a Shield monitor parked next to the short wall, marking the next Gondola, which is leads to a short trip over a lava pit with a Rexon and a moving platform below. At the end of this is a Star Post.

From here, the player will be heading into the caverns for their next big task: ascend to the top while being chased by rising lava. After the second door closes, the player will encounter some platforms; some moving and some stationery. At the lower right end of the area is another Shield monitor. Also, above that spot is a long platform that leads to a hidden area, intercepted by a ceiling Spiker. The platforms on the left however are dead ends. If the player is quick enough, they can also collect a Super Ring monitor situated on the last solid platform before the exit door. Once past the exit door, it is a straightforward pathway, with the cave opening out for a brief section.

When the cave closes in again the player will fall in a pit with two Springs on opposite sides. A rock blocks the next obstacle: a set of moving spikes. The player can collect the Super Ring monitor, but jump too high and they will hit the spikes above. The hidden red Spring can be used to collect a cluster of up to nine Rings, but they must be wary of Spikers. Three Gondolas will then send them across the large lava pit safely, earning the player nineteen Rings. If the player stays on the left of the second Gondola and allows it to drop, the player can collect a One-Up monitor. A red Spring will then take them back up to where they left off. At the end of this pit is a Rexon. The next part is a relatively safe section involving moving platforms, but ceiling Spikers will be ready to deploy their spikes if the player is not careful. An upwards section leads them out of a tunnel to a Star Post, which marks the Zone's boss arena. The player must jump over the lava pits once the road flattens out to initiate this boss battle.

The boss of Hill Top Zone is the Egg Scorcher Mk II, a fire-spewing submersible which sets the grassy platforms on fire. After attempting to scorch the heroes with a flame jet, Robotnik submerges beneath the lava, before resurfacing again on the other side and repeating the process. This boss can be defeated easily by continuously bouncing on the machine as soon as it appears. Using this method, Robotnik can be defeated before he sinks into the lava for the first time.

In Sonic Drift 2, Hill Top Zone appears as a racecourse entitled Hill Top 1. This stage is the second track of the Purple GP, after Emerald Hill 1 and before Dark Valley 1. The racers enter the region during the White Grand Prix, where "Hill Top 2" is the fourth track, coming between Ice Cap and Mystic Cave. As with most other races in the 2nd Chaos Grand Prix, the player has to complete three laps of the track to proceed, and the fastest racer gets a Chaos Emerald.

In Sonic Speed Simulator, Hill Top Zone originally did not appear as an independent world. At first, as an Obby named Green Hill Obby 3 in Green Hill, features an obstacle course whose design mimics Hill Top Zone's. On 7 May 2022 however, Hill Zone appeared as an independent world under the name Hill Top. In this game, it serves as the game's fifth world, which can be unlocked after the player achieves at least five rebirths. Its features include many of its original elements and key designs, including evergreen pine trees, stones, wooden bridges, and lava flows. However, there are no mission card here that allows the player to unlock a new playable character.

In the Sonic the Comic series published by Fleetway Editions, the Hill Top Zone is one of the many Zones found on Mobius. This Zone was affected by many of Dr. Ivo Robotnik and other villains' diabolical plots, but was protected each time by the Freedom Fighters.

In the Sonic the Hedgehog film series produced by Paramount Pictures and its spin-offs, Hill Top Zone is an alien region that was once visited by Tails. 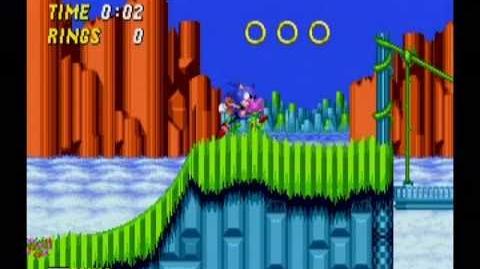