An active volcano hidden deep within an iceberg.

Hidden Volcano[1] is a race track that appears in Team Sonic Racing.

Hidden Volcano is a route located in Glacierland, a land of snow and ice. Hidden Volcano covers the interior of an active volcano hidden inside an iceberg, where ice and magma exist side by side

This area is distinguished by its magma pools, miniature volcanos, rivers and falls of molten rock, floating ice cubs, and ice crystal clusters on the walls. At the starting line, there is also a hostile humanoid magma giant that towers above the track and swings its fists downward on the track.

Hidden Volcano requires calm judgement and bold techniques to conquer its slippery ice roads and varying bumpiness caused by tears in the earth.

One of the first obstacles the player encounters in Hidden Volcano is the track's giant magma monster. In gameplay, this creature will swing its fists into the roads surrounding it. Noticeably, it alternates between the roads it swings its fists into in order to damage the racers. If a racer is hit by the magma monster, they will be flattened, causing them to lose Rings and slow down temporarily. In addition to that, there are shallow magma pools along the race track that non-Technique-Type characters cannot drive across without slowly sinking into it and losing speed.

At the start of the race track, the racer will stand before the track's magma monster, which they must drive around by taking either the left or right road in front of them that lead around the magma monster. Regardless of the player's choice, the roads will eventually remarge. After the roads have come together again, the road takes a turn to the right before ending abruptly and leading down to a lower floor. On this floor, there are shallow magma pools on both sides of the road. Eventually though, the road ends abruptly again and leads down to an even lower floor which has shallow magma on the left side of the road. The road afterward leads into a partly ice-covered, winding road without any barriers to keep the player from driving off the road. There is also a shortcut on the left side of the winding road, if the player use the third Boost Pad to jump off the road to reach a partly ice-covered road.

Eventually, the road leads into a large crater. The main route goes through the middle of this crater and has shallow magma pools on both sides of the main road. The player can also take a sideroute on the right or left side of the road when entering the crater in order to go up an ice hill and then jump off an ice ramp that will lead back to the main road. After exiting the crater, the player will then enter a sharp turn to the left through an ice cave. They will then head downhill before hitting a wide spring that will send them flying over the track's magma monster and down on a right-turning road. After getting through this turn, the player will then enter a stretch with a narrow road that has shallow magma pools on both sides of it. After that, the road will turn to the right, and the player will arrive at the finish line.

Hidden Volcano also has its own mirror image version of it where the left and right sides are interchanged. 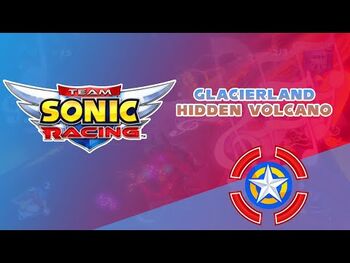