Hidden Palace Zone is a mysterious Zone which was originally removed late in the development of Sonic the Hedgehog 2 for the Sega Mega Drive. It is an underground cavern full of water featuring sparkling gems and rocky regal structures, possibly ruins of some ancient civilization. It was among the last levels deleted from the game. A similar stage with the same name later appeared officially in Sonic & Knuckles, with this incarnation serving as its inspiration.

Eventually, this version of Hidden Palace Zone was officially completed and included in the 2013 remaster of Sonic the Hedgehog 2. It was also included in Sonic Origins.

Early mock-up image of Hidden Palace Zone was sent to various magazines to promote Sonic the Hedgehog 2. For years, this is the most that players had seen of the level. It was determined not to be a screenshot from a prototype for several reasons: Sonic's sprite is different than any of those seen in earlier versions of Sonic the Hedgehog 2, Sonic is off-center, he is running in mid air, the use of background is different, the placement of two enemies at the bottom is off, the HUD is not italicized, etc. These are some of the same characteristics seen in other promotional mock-up pictures sent out by Sega during the same time frame. A promotional VHS from Spanish gaming magazine Super Juegos from October 1992 also features gameplay footage of Hidden Palace Zone from the later prototype.[1]

Hidden Palace Zone was intended to be a two-act stage and the Zone where Sonic would convert to Super Sonic after collecting all seven Chaos Emeralds. However, it was then changed to one act before the developers eventually scrapped the proposal and instead, the player would access Super Sonic regardless of which Zone he is in.[2][3]

Hidden Palace Zone was one of five Zones that were removed from the game, with Yuji Naka claiming that one of them was fully completed before being removed in the very last minute due to memory limitations.[4] In ICEknight's interview with the level artist, Craig Stitt, he expressed dissatisfaction with the decision to remove the Zone just a few days before the game was declared complete.[3]

Players first noticed a somber music track listed as "Sound Test 10" that did not play anywhere else in the game, leading some to wonder if it was related to the elusive Zone that was exposed in preview images. When Sonic the Hedgehog 3 was released, the level icon for Hidden Palace was spotted in the standalone Sound Test option (as it was directly built off the prequel's engine), suggesting that remnants of Hidden Palace still existed in the game data of Sonic the Hedgehog 2. It was eventually discovered that players can still access a garbled version of it with a cheat device, confirming that the unused music track was intended for this Zone in some late form. However, the Zone was overwritten with a vaguely-defined Oil Ocean object list, as the player falls to their doom when the Zone is accessed.

When the Simon Wai prototype was eventually leaked, a much more playable (but still obviously incomplete) version of Hidden Palace Zone was made available for the first time. Only a small part of the level was actually finished, as it cuts off after a certain point. A slot for a second act was also found at this point of development, but that had even less work done, as it was a copy of the first act with an empty object layout. There was much speculation about other features seen in this version of the level as well, such as the large ramp at the end that cannot that cannot be climbed up without Debug Mode, and the tubes similar to the ones in Chemical Plant Zone.

Hidden Palace Zone, from the 2013 remaster of Sonic the Hedgehog 2.

A lost, mystic ruin made of geometric rocks and glowing emeralds.

In the 2013 remaster of Sonic the Hedgehog 2, this Zone can be accessed in Mystic Cave Zone Act 2 by falling through a pit (this is the infamous inescapable spike pit in the original, but the spikes were removed in the remaster) around halfway through the act. The zone is completely optional.

The Zone begins with the player character falling through the pit, similar to the intro of Lava Reef Zone in Sonic & Knuckles. The background music is the multiplayer music of Mystic Cave Zone from the original Sonic the Hedgehog 2. While pieces of the level design are borrowed from pre-release versions of the Zone, it is for all intents and purposes a complete re-imagining of the level. In addition to some familiar features, not previously seen in any version of the game are as a jellyfish-type Badnik that acts similar to Grabber, fully functional water slides, the unscalable diagonal tunnels given a propelled zipline device, spiky mines that are swung back and forth and a unique Dr. Robotnik boss fight (dubbed Brass Eggman) involving musical instruments, explosive debris and water. The Tails 1-Up monitor from the prototype is also gone and replaced with a shortcut just beyond the space it occupied and the Master Emerald breakable objects now conceal springs. When the Capsule is opened and the Zone is cleared, the player proceeds to Oil Ocean Zone, skipping the remainder of Mystic Cave Zone.

In the Simon Wai prototype version of Sonic the Hedgehog 2, Hidden Palace Zone only has two Badniks by that point of development: Redz and BBat. Through hacking, the triceratops Badnik from magazine previews (Stego) was found, and both it and BFish were found in the Debug Mode of the earlier Nick Arcade prototype (which was leaked much later). In the 2013 remaster, the triceratops was reinserted and the aquatic robot was replaced by the previously unseen Jellygnite.

In this boss fight, Eggman flies in front of a giant archaic organ, always following Sonic's movements. The massive bell on his Egg Mobile will activate every few seconds. He begins with four descending notes, causing four hazardous spiked balls to fall from the ceiling and land on the water below the arena. The water will then rise over the platform, taking the floating balls with them for a second or two. After being lowered to the original water level, the balls will detonate and emit a vertical splash that must be avoided. After a few more seconds, a long and loud bellow will emit from Eggman's bell, causing the screen to shake until one larger spike ball descends, and proceeds to move slowly back and forth along the bottom of the screen. Eggman must be tricked into moving above the bomb as it detonates, causing a water jet to knock the scientist from the sky, allowing a short time frame for Sonic to attack.

The head developer of the 2013 remaster of Sonic the Hedgehog 2 Christian Whitehead was behind the implementation of Hidden Palace Zone in this port though he used some of Simon Thomley's concepts. During developing stages, Sonic Team was not happy with the panning of the level, commenting that Sonic could not move through the stage as fluidly and fast and did not have the right feel of Sonic as a result. As such, Whitehead and Thomley decided to give the level its own experience, complete with its own level design, gimmicks and enemies, making it a secret Act of Mystic Cave Zone. Instead of conceiving Hidden Palace as a place where Sonic would obtain his Super State, the Zone had a Phantom of the Opera vibe; with a being that lived down there maintaining a grand cathedral but has been lost from time to time".[5] 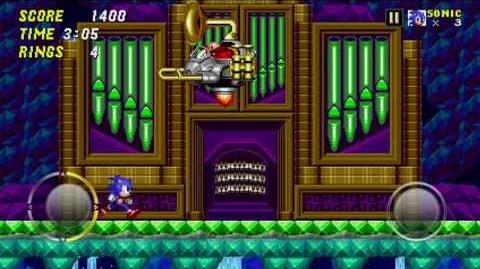