"Hedgehog Hunt" is the seventy-first episode of the anime series, Sonic X. It first aired on 11 April 2005 and 11 March 2006 in France and the United States respectively.

Following their battle with the Metarex fleet, Sonic and the gang are stranded on an alien planet with the Chaotix, who are running a cafe named the Croc Canteen to pay for parts for their own spaceship. Dr. Eggman arrives looking for Sonic and the others, while Pale Bayleaf waits in orbit to shoot the Blue Typhoon down. Helping out Sonic and the gang, the Chaotix provide parts for their ship. However, Eggman provides the real assistance when he disguises the Crimson Egg as the Blue Typhoon and takes the full force of the Metarex attack. Pale Bayleaf moves off, and no ambush awaits the real Typhoon once it takes off. 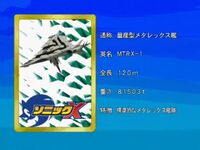 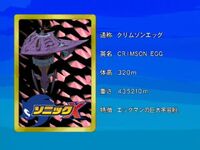 Crimson Egg
Add a photo to this gallery