You're not gonna treat the S-Team like chumps! We’ll teach you a lesson!

Hector Dragg is a character in the anime series Sonic X and its comic series published by Archie Comics. He was once a member of Station Square's Speed Team, and the second-fastest man alive, right behind his friendly rival and team leader, Sam Speed. However, when Sonic the Hedgehog arrived in the city, Dragg was bumped to third place, and after becoming reckless to the point of endangering innocent people when trying to outdo both Sonic and Sam, he was fired by Sam. He then became a member of S.O.N.I.C.X., a villainous group set on destroying Sonic for ruining their lives.

Dragg makes a brief cameo appearance, walking beside his colleagues towards their cars in order to chase Sonic on the highway outside of Station Square. He is also seen chasing Sonic with the others and due to his personality, it is led to believe that Dragg is the first one to suggest a speed increase to keep up with Sonic. But even with Sam's incredible speed, Sonic boosts ahead with a sonic boom, leaving the entire team in his dust.[1]

Dragg first appears in the comics as a S.O.N.I.C.X. member. The Organizer recruited Hector Dragg into the organization and he played a crucial role in freeing Commander Passer from prison so he could join them as well. S.O.N.I.C.X. They captured Sonic and brought him to their base on the abandoned Prison Island. They all introduced themselves, shared their stories of how he "ruined" them and told him that they were united by the Organizer. Sonic broke into laughter at the group's name, believing it sounded like the name of a fan club. He swiftly broke out of the base with little effort, despite them sending their robots and Li Yan's gang after them. They then told the Organizer of how their first mission was a failure, but he assured them that next time will go much better for them.[2]

When S.O.N.I.C.X. sent a group of Multi-colored Sonic robot clones to attack the original, Dragg and the other members accidentally shot the final Sonic clone by mistake.[3] Dragg kidnapped the President in order to force him to make Sonic and his friends illegal, thus making them enemies of the state. However, due to an incident where Sonic and Dr. Eggman switched bodies, Sonic-Eggman crashed the Egg Mobile into Dragg's car, releasing the President and forcing the pilot to retreat.[4]

Dragg and Dr. Kai Narasu are charged with firing a mutagen at Sonic to turn him into a giant monster and ruin his reputation completely, thus exposing him for "the monster that he is". However, after five missed shots during a battle with Eggman, they're both spotted by Sonic and rush after him on Hector's motorbike, but when Dragg finally outruns Sonic, they miss him as a consequence. Dr. Narasu scolds Dragg for his lack of care, but he admits that he isn't on the organization due to revenge, but rather to prove that he's the fastest man alive to everyone.

After his bike is refueled, Dragg once again gives chase, as Sonic reaches Team Chaotix's headquarters to ask for their help in discovering S.O.N.I.C.X.'s new plan. Narasu makes another attempt to hit Sonic with a dart, but it hits Vector instead and makes him grow into a giant.[5] Sonic corners both Dragg and Narasu and makes them confess what they did to Vector. Espio claims there is an ancient ninja remedy which can cure him and they head to the city, as Sonic leaves Charmy Bee behind to watch over the duo. Both escape after Hector uses the "look over there" technique, distracting Charmy.[6]

Dragg is a proud and arrogant young man whose speed is his most prized quality. Before Sonic came to Earth, Dragg was satisfied with being the second-fastest man alive and had a friendly rivalry with Sam. However, once Sonic stepped in and kicked him to third place, his pride was severely damaged. Dragg became obsessed with outracing Sam and Sonic to the point that he became reckless with his driving and endangered the lives of civilians. He is so desperate to surpass Sonic that he even endangers his own life while chasing him.

Like all members of S.O.N.I.C.X., Dragg hates Sonic. However, unlike the other members of S.O.N.I.C.X, he claims that he does not care about revenge, and only wants to prove he is faster than Sonic, to the point that he will jeopardize a mission to do so. Dragg has a laid-back attitude, not acting serious during missions. However, Dragg also has a bit of a temper and becomes very angry if someone mocks him. He also enjoys mocking people, such as when he taunted Dr. Kai Narasu for thinking Sonic was a robot. Despite his negative qualities, he used to be a member of the Speed Team and admits that it was his own fault he got fired, showing a small amount of decency.

Like Sam Speed, Hector Dragg is a very skilled driver, and is able to expertly drive both cars and motorcycles. Hector is even skilled enough to drive vehicles that are designed to go fast enough to keep up with Sonic. Hector’s driving skills are only surpassed by Sam’s.

After joining S.O.N.I.C.X., Hector was given a laser pistol. 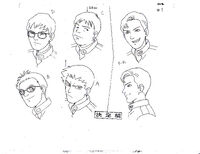