watch 03:03
The Loop (Games)
Do you like this video?
Main page Gallery

This is Heavy Dog. Target has been sighted: proceeding to engage and neutralize.

— The Heavy Dog, Shadow the Hedgehog

Mantis Platoon HD1/Heavy Dog is one of the bosses in Shadow the Hedgehog. It is a giant mech that is the same model as Blue Falcon.

It is used by a G.U.N. soldier in an attempt to stop Shadow from harming anyone fifty years ago when Project Shadow was discontinued. In the flashback of fifty years ago, Shadow saw Maria die at the hands of the Heavy Dog's pilot. It wields a particle beam cannon and several weapons on its side which can be broken off and used against it.

This vehicle is fought after Dark mission of The Doom. It is fought on a metal platform with raised platforms; these can be used to avoid the particle beam cannon, however the cannon can also reach this area. The Heavy Dog releases explosives that can be used as stepping stones to attack or disable a cannon that fires the same missile as an RPG. If you attack the Heavy Dog's RPG's enough, then they will fall off Heavy Dog for the player to use.

"Mantis Platoon, Heavy Dog Reporting in. Primary target, and the girl have been located. Acquiring Targets. En route to intercept and destroy."
—The Heavy Dog, Shadow the Hedgehog 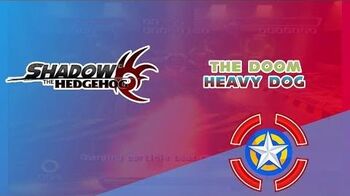