The Heavy-Egg Hammer (ヘビーエッグハンマー, Hebīegguhanmā?) is an enemy that appears in Sonic Heroes. These robots are an upgraded version of the regular Egg Hammer.

The Heavy-Egg Hammer looks virtually the same as the Egg Hammer, except with a slight purple tint in its color scheme, and most notably, it wears a helmet.

Heavy-Egg Hammers are considered to be the most difficult enemy to defeat in Sonic Heroes as they are resistant even to Power Formation attacks. In addition, they cannot be stunned by the Thunder Shoot. Heavy-Egg Hammers are invulnerable to all attacks except for the Team Blast. They have only one weak spot and it lies underneath their helmet. Removing the helmet can be a challenge in itself but can be done in two ways. After they use their spinning hammer attack, they can be knocked over either with Power attacks or Thunder Shoot. Their helmets will fall off when they fall over. The second way is to use Speed Formation's Tornado Jump attack to blow off the helmet. The weak spot is indicated by a small blinking yellow and green light and can only be damaged by Power Formation attacks. They have a total of thirty hit points. Like the Egg Hammer, it will always drop one Power Core when destroyed. 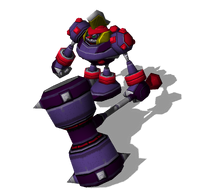 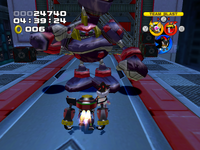