The Heal Cannon, from Shadow the Hedgehog.

A weapon for medical purposes.

The Heal Cannon is an unlockable weapon in the game Shadow the Hedgehog. Unlike any other weapon, this weapon restores Health Gauges instead of depleting them, similar to Heal Unit, except it can be fired multiple times. By firing this at any GUN Soldier, they will no longer shoot Shadow, but salute him instead. It can also affect certain Black Arms enemies such as Black Warriors, which causes them to become neutral towards Shadow. Shooting an enemy with the Heal Cannon also fills up the meter affiliated with the said enemy (Black Arms will fill up Shadow's Dark Gauge while GUNs will fill up Shadow's Hero Gauge).

The player must first complete Final Haunt in story mode to get this weapon. To get the upgraded version, one must complete it again with the opposite mission.

Shadow with the Heal Cannon 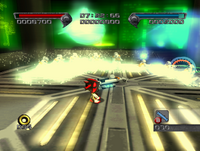