After crash-landing on the Egg Carrier, Sonic, Tails and Knuckles start to carry out their missions. Doctor Eggman starts launching missiles at Sonic, but he easily dodges them. One missile hits the Egg Carrier which opens up a hole. Knuckles leaves Sonic and Tails to search for the last piece of the Master Emerald. Eggman then calls Gamma and orders him to come to the control deck.

Amy makes her way out but she's caught by Bocoe and Decoe. She then pulls out her Piko Piko Hammer but is stopped by Eggman. Sonic then says to let her go, but Amy frees herself, hits Eggman, Bocoe, and Decoe, and slams the wall making Sonic and Tails fall on Eggman. Decoe then snatches Lily, and Eggman gets Sonic and Tails off of him. He then grabs the terrified Lily's necklace and a Chaos Emerald pops out. He then orders Decoe to give back Lily. Gamma then appears to the deck, and Eggman orders him to get rid of Sonic. Amy tries to get them to stop, but it does no good. Sonic defeats Gamma and is about to finish him off when Amy gets in his way. She tells him that Gamma set her and Lily free. Sonic believes her. An explosion then goes off behind them. Tails says that the ship is losing altitude. Sonic tells Tails to get Amy and Lily down to safety while he searches for Eggman. Amy manages to get Gamma to reboot. Gamma asks Amy why he saved her. She replies that she was just returning the favor he did for her earlier. The three of them then leave the Egg Carrier.

Meanwhile, Chris and Big manage to find Froggy in a room. When they're about to get him, an explosion causes the floor in front of them to break. On the ground, Chuck sees Amy and Tails and takes them in his car back to the house. Tails is still worried about Sonic. Knuckles manages to find the last piece of the Master Emerald, and starts to find a way out, when he's sent back into the past again. He spots an injured Tikal and some unconscious Chao on the ground in front of the shrine. She tells him that she tried to stop her father, but he didn't listen to her. Knuckles is then sent back into the present and wonders why he's being sent back to the past. Big is panicking that he and Chris might not get Froggy back to safety, but a quick drink manages to calm his nerves. Big uses his fishing pole to allow Chris to try to reach Froggy, and he manages to get him. When they reach the deck, they spot Chaos and Eggman.

Eggman tells Chaos that Froggy has an unusual tail. He starts chasing Chris and Big, jumps in front of them, and knocks Big down. Eggman picks up Froggy and chokes the Chaos Emerald out of him. He then feeds it and the Emerald from Lily to Chaos 4 turning him into Chaos 6. He then feeds Froggy to Chaos 6 to give him back his tail. Big tries to save him, but his face plants into Chaos 6 instead. Chris then climbs on top of Big and attempts to rescue Froggy, but Chaos sucks them in. Froggy's tail then disappears and reappears on Chaos. Sonic then appears and sees Chris inside Chaos. He attempts to rescue him, but gets pinned down. Knuckles shows up holding up the tentacle that had Sonic down. They both then come up with a plan to free Chris, Big, and Froggy. They find Chaos' weak spot and use the Shovel Claws to expose it. Chaos 6, being defeated, is then reverted back to Chaos 0, and Knuckles picks up the Emeralds. Sonic goes after Eggman, while Chris, Knuckles and Big are left with the X Tornado. Bocoe and Decoe have no choice but to bail out.

Back at Chris' house, Lily shows Amy a picture of her brother and sister, and that she misses them. Amy offers to help find them. Meanwhile, Sonic falls off his ride with Eggman and lands headfirst in the dirt. After getting out, he finds himself in Mystic Ruins. Meanwhile, Eggman sets up a missile and it lands in the middle of Station Square scheduled to detonate in two minutes. Tails thought that Sonic would know what to do if he were here. The people nearby begin looking at Tails hoping he could defuse the missile. Tails is hesitant at first but decides to give it a go. He starts thinking of the time he first met Sonic, and how he was always there for Tails, but thinks he should start doing things on his own. He then figures out which wire to cut and successfully defuses the missile.

Meanwhile, Chris, Big, and Knuckles land the X Tornado near Mystic Ruins. Knuckles goes to Angel Island to fully restore the Master Emerald, but moments after he left, Chris spots the last Chaos Emerald near the X Tornado and rushes off to give it to Knuckles. Big and Froggy then decide to head home. 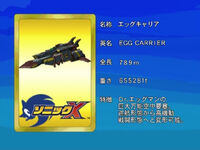 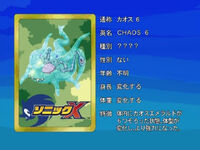