"The Adventures of Knuckles and Hawk"

Hawk (ホーク, Hōku?) is a character in Sonic X. He is an archaeologist from Oriental City and a good friend of Knuckles the Echidna, who is a companion of his adventures.

Hawk is a portly man with black hair and eyes. He wears a yellow shirt, a green coat, and brown trousers and greenish shoes.

Hawk recovered the red Chaos Emerald and Shovel Claws on an archaeological dig, both of which he later gave to Knuckles. He later helped him destroy E-91 Lady Ninja to get the Emerald as well.[2]

Hawk later participated in the Chaos Emerald Martial Arts Mash-Up for the red Chaos Emerald, but was knocked out of the first round in the tournament by Tails.[3]

Hawk is a somewhat easily distractible and clumsy adventurer. In fact, he is rarely very clever and cunning. More emotional than sensible, he sometimes forgets certain details. He is also very sensitive and appreciates Knuckles friendship.

While Hawk seemed very weak in his debut performance (perhaps since he was up against a robot), it was later shown he was very skilled in the martial arts, when he reappeared in the Chaos Emerald Martial Arts Mash-Up tournament.[3] 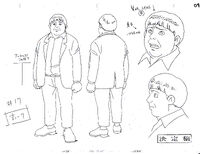