A nighttime track centered around a haunted clocktower.

Haunted Castle[1] is a race track that appears in Team Sonic Racing. It is based off the nighttime Acts of Rooftop Run.

Haunted Castle is a racing circuit set within Rooftop Run, a section of Spagonia with structures inspired by real-life West European architecture, including those in France, Italy and Great Britain. As such, the circuit's roads lead around a quite traditional urban area built mostly out of stone. The buildings around here also have the area's characteristic orange rooftops. In the background, one can see the fair tents and grandstands where several cheering Chao sit.

The course is set during the night and takes place in and around a broken clocktower, with several of its parts floating in midair. Around the tower are green, spectral routes. If the player looks carefully they can also see both the sun and the moon.

A unique obstacle that is encountered in Haunted Castle is the giant clock face which serves as a platform for the racers. This clock face has fast-moving hands, and if the player touches these hands, they will take damage and spin out temporarily. There are also several moving clock gears that roll across the road within the clock tower. Driving into these gears will flatten the player, causing damage and massive slowdown.

Within the sewers is a steady stream of green slime that only Technique-Type characters can drive across without losing speed. Along its walls are pipes that will occasionally spew out the liquid, pushing racers into the stream of slime. There are also halberd-wielding ghostly armors along the sides of the tracks that periodically swing their halberds into the road section in front of them. If they player gets hit by these halberds, they will take damage. There is an alternative route blocked by a cracked wall that racers can break through with Power-Type characters and Wisp power-ups. Once broken down, the path will remain unobscured for the remainder of the race.

The race begins at the foot of the clocktower. After taking off from the starting line, the player will drive up on a vertical, spectral road. After driving through the disassembled clocktower, the road turns sharply to the right and then to the left. However, the road in the left swing has no railings on either side of it, meaning there is nothing stopping the player from driving off-road. In addition, this swing is long and turns to the left for quite a while. As such, the player has to drift through this turn carefully. Eventually, the road will end with the player hitting a ramp and being flung through midair until they land on another green spectral road. Upon arriving on this road, it will immediately make a sharp turn to the right for a long time. In addition, this road has no railings on either side of it.

Regardless of which path the player takes, the main road in this section has a channel with speed-reducing green slime flowing right through its middle. Here, non-Technique-Type characters should stay close to the roads on the sides of the channel while paying attention to the pipes protruding from the walls that spew damage-inducing slime out of them. Eventually though, the channel ends with the slime falling into a sewer grille in the floor. There, the road makes a sharp turn to the left and crosses through a large corridor with halberd-wielding ghostly armors on both the right and left side of the corridor. At the end of the corridor, the road turns to the left and leads out of the underground tunnel. The road will then turn to the right and lead straight to the finish line.

Haunted Castle also has its own mirror image version of it where the left and right sides are interchanged. 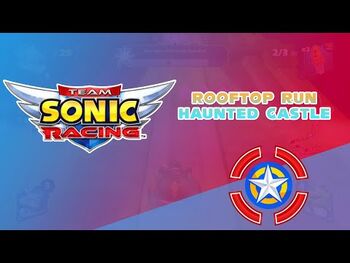