Harvey Who, from Sonic Universe #43

Harvey Who is a character that appears in the Sonic the Hedgehog comic series and its spin-offs published by Archie Comics. He is a mobian owl, a master of disguise and espionage, and was the head of the Freedom Fighters' Secret Intelligence Division. He lead the SID and its operatives that were placed in a sophisticated network among Dr. Ivo Robotnik's territories, collecting information on Robotnik's current plans and operations and spreading it to the rebel groups, allowing them to make them fail with ease. Because of his success as the leader of SID, Dr. Robotnik made frequent attempts to find out the identity of the SID's leader, so Harvey had made sure that no one outside the Freedom Fighters knew anything about him, except his last name. He has brown, cream and black feathers, brown eyes and an orange beak. He wears a green hat and a robot disguise (missions only).

Evan Stanley was tasked with redesigning Harvey Who. As she was doing this in a math class, her boyfriend had drawn a mustache on Harvey as a joke. Despite this, Evan kept the design.[1]

Harvey is a large brown owl. In his first appearance, he wore a green robot disguise. However, his redesign makes him appear much older and now has a mustache.

Head of the Secret Intelligence Division

Harvey Who and his agents had managed to infiltrate many of Robotnik's plans and schemes, allowing the Freedom Fighter groups they contacted to foil them easily. After Robotnik realized the Freedom Fighters may have an inside man, he had Snively and Crabmeat do some literal digging with a shovel. They found a Mole miner whom Robotnik interrogated. He asked "Who is the head of the Secret Intelligence?" and the Mole replied "That's right!" Misunderstanding, Robotnik had his SWATbots take away the mole and went on to his next plan, the Wheel of Misfortune, which Harvey had secretly infiltrated disguised as a robot mover. He informed the Knothole Freedom Fighters of every move Robotnik made. He accompanied them when they made their attempts to stop Robotnik in his tracks and occasionally left behind notes to Robotnik's lackeys. Later when Sonic the Hedgehog and Sally Acorn went to Renobotnik after a hard day's work, Harvey had infiltrated Robotnik's casino as a card dealer. He was watching the two and slipped Sonic a card with a warning note, saving him from having his head crushed. After Sonic used static electricity to short out a particularly large SWATbot, he collapsed and was captured by Robotnik. Robotnik tied him to his Wheel of Misfortune so his robots could vaporize him. Luckily, Harvey managed to turn the lights off and saved Sonic and brought him back to Secret Intelligence Headquarters. Sonic said he was impressed with Harvey's disguises, how he rescued him, and asked Harvey a single question: "How many licks does it take to get to the chewy center of lollipop"? To which the owl replied "That information, my dear boy, is classified!" Following Robotnik's death at the hands of Sonic the Hedgehog, the re-formation of the Royal Secret Service and open war being declared with the Eggman Empire, the SID has likely been dismantled and Harvey retired as leader. (StH: #16, #50, #61, #130)

When Ixis Naugus becomes king, Elias goes to Harvey for help, with the Owl initially refusing based on Maximillian Acorn's history of disregarding his counsel, including that regarding Naugus. Harvey tells Elias to move away like he had planned, and that he will come back in secret. In the meantime, Harvey promises to put together a team, the Secret Freedom Fighters. Harvey subsequently takes a walk in the Julayla Memorial Park, and notices Silver the Hedgehog sitting on a bench, reviewing his failures. Harvey asks him if he would like to set things right, save the city, and never get noticed by the history books. Then Harvey recruits Silver into the Secret Freedom Fighters. He would recruit additional members and allies as time went by, traveling to Freedom HQ to enlist an exiled Nicole and singer Mina Mongoose while also recruiting Sir Charles Hedgehog of the Council of Acorn. Chuck would rebuild the original Robotnik's Metal Sonic as Shard the Metal Sonic, while unexpected arrival Larry Lynx made yet another addition to the team. After contacting Lupe in Soumerca, Harvey rounded out his team with the Wolf Pack twins Leeta Wolf and her sister Lyco.

As promised, Harvey had Elias brought back to New Mobotropolis in secret by Leeta and Larry, but the young king was initially skeptical as to Harvey's choice of teammates. However, Harvey convinced him of the practicality of the unusual assortment, and then began directing them in the field. Utmost in his operating style was maintaining secrecy, as their operations would come to an end were they to be discovered. While he was impressed by the past performances and abilities of his new pupils, they quickly learned how stern a teacher he could be when the team of Silver, Larry, and Shard returned from Ixis Vale's tomb empty-handed. They were then dispatched to search for their missing teammates, during which their identities became known to Geoffrey St. John, who quickly deduced Harvey's involvement. However, given his growing realization of his master's evil intent, Geoffrey kept their identities to himself. Harvey and his team managed to halt Naugus' plans to take over the city using Ixis Magicks, but were forced to remain in hiding. Harvey was not seen again prior to the second Genesis Wave washing over Mobius. 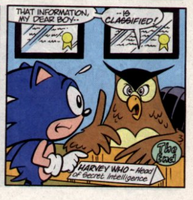 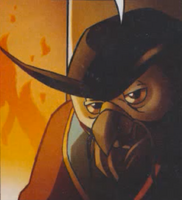