The horizon has turned upside down.

Hang Castle is the eleventh stage in Sonic Heroes.

Hang Castle is a large, mysterious and spooky area filled with many towers under a large moon in the background. The stone hallways outside of the towers are filled with torches, and sometimes contain dull-colored plants to the sides. Some tall, round platforms contain notable illumination marks on the surface resembling spiders. Throughout the level, the castle seems to have red banners with an eye embedded on them. Mist seems to also be present in some parts of the stage. Towards the end of the level, there is a large tower crafted in the image of Dr. Eggman on one side and Neo Metal Sonic on the other.

After the second team battle, Team Sonic infiltrates the castle to find Dr. Eggman and Shadow. Team Dark enters the castle while Shadow ponders over his identity and what exactly Sonic is. Team Rose finds the haunted castle and continues after Amy reminds Cream and Big of Chocola and Froggy. Team Chaotix is off to find the keys located in the castle, presumably to get into the Mystic Mansion. Following Mystic Mansion, the next stage, the teams all pass through the Hang Castle area again to fight Robot Storm before moving on to Egg Fleet.

Hang Castle is the first of two stages, the other being Mystic Mansion, that contain the mysterious orb switch which seemingly flips the stage upside down. The player must tread around the floating platforms cautiously, especially if they are used to carry the player across bottomless pits. Some of the floating platforms that move up and down will not move until the player stands on them.

The stage introduces stone walls that can be destroyed with Power Formation attacks which conceal Item Boxes, switches, or passageways necessary for the player to proceed. Also new to this stage are the torches, which can be used to score points by extinguishing the flames, though if the flame is touched the player will take damage. Some torches are simply flames formed on platforms and in midair, though with the latter they serve to create some sort of an invisible pathway the player can walk on.

Every now and then, pumpkin ghosts will pop out in unexpected places. The Egg Magician/Egg Bishop enemy also debuts here. 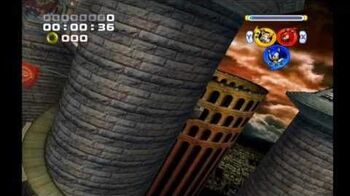 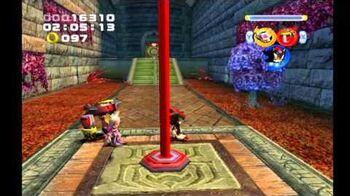 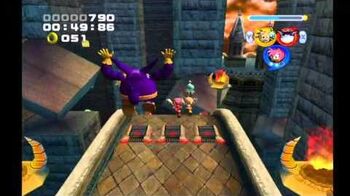 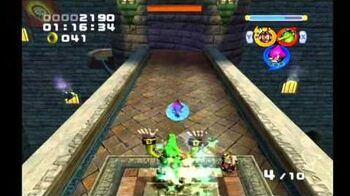 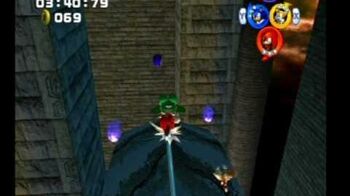