The Gun Wing[1] (ガンウイング, Gan'uingu?) is a robot deployed by the military organization Guardian Units of Nations, and a part of the Beetle series. It is essentially a modified version of the Gun Beetle. It appeared as an enemy in Sonic Adventure 2 and Sonic Adventure 2: Battle. 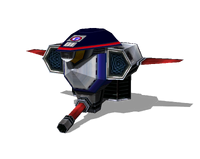 The Gun Wing's model.
Add a photo to this gallery