The Gun Pawn (ガンポーン, Gan Pon?), also known as the Assault Series G3-33,[1] is an enemy that appears in Sonic Chronicles: The Dark Brotherhood. It is an old model of Badniks which was used by the Nocturnus Clan.

The Gun Pawns were created by Dr. Eggman to serve as the front line soldiers of his robot army. They are heavily armed with various forms of artillery, such as battery missiles, cannon hands and chest-mounted flamethrowers, literally making them walking weapon collections, and are only programmed for destruction. However, the Gun Pawns have a significant flaw in their design; Dr. Eggman filled the Gun Pawns with so many weapons that they were left with very little room for armor, leaving them with very weak defenses.[1]

Following Dr. Eggman's presumed death and the Nocturnus Clan's attempt to escape from the Twilight Cage, the Gun Pawns were found by the Nocturnus Clan, who took control of them and began using them as a part of their own forces.

The Gun Pawns can only be encountered in Metropolis except for one on the southeastern part of Angel Island. Their basic attack is firing missiles from their hand blasters, which can deal four hits per use. Their POW moves are Lock On (ロックオン!, Rokkuon!?), Blast, Mega Blaster (メガブラスター, Mega Burasutā?) and Rocket Volley (ロケットランチャー, Roketto Ranchā?, lit. "Rocket Launcer") which can inflict Weaken and damage opponents next to the target. They also come in a more powerful variant called Gun Pawn Mk. II. 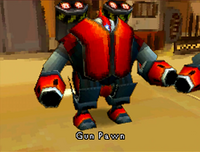 A Gun Pawn walking around in Metropolis