A Gun Beetle in Sonic Generations.

Stupid G.U.N. Beetle Sentry Drones! They may be weak, but they are relentless!

The Gun Beetle[1] (ガンビートル, Ganbītoru?), also spelled as GUN Beetle,[2] is an enemy in the Sonic the Hedgehog series. It is a mass-produced robot model deployed by the military organization Guardian Units of Nations, and a part of Beetle series.

Resembling the Mono Beetles, the original Gun Beetles look like grey balls with blue outlines and armor on the front. On top of them, they have a sharp blue cap with a red-striped edge. Below this cap, reaching from just behind the edge of their front armor to far behind their back, they have a horizontal yellow turbine disk with a red and blue-striped frame. On their "face", they also have a single yellow, red and white lens. Unlike the Mono Beetle, however, the Gun Beetles come equipped with a thin red gun barrel on their bottom and box-shaped magazines on their lower rear.

In Sonic Generations, the Gun Beetles' design was slightly tweaked. Here, their lenses were made more red and white, their cap was emblazoned with GUN's symbol and the number "01", and their gun became more advanced.

The Gun Beetle first appeared in Sonic Adventure 2 and its remake Sonic Adventure 2: Battle. When attacking the player, it shoots one projectile at a time. It awards one hundred points when destroyed. They appear in the following stages:

Each Gun Beetle has different ways of attacking. Some Gun Beetles do not attack unless the player is close to them, while others will attack with two shots per second, even if the player is far away (especially in Hard Mode). In rare cases, the Gun Beetles may not even shoot at all. Gun Beetles are not immune to their shots however, so, if a Gun Beetle is hit by another one's shot, it will be destroyed.

When the player is within a Gun Beetle's range, its eye will start glowing red. It will then track the playable character's movements before taking aim and shooting at them.

In Shadow the Hedgehog, the Gun Beetle appears as an enemy. In this game, it carries a variety of guns that it can use during battle. These weapons can be picked up by Shadow when the Gun Beelte is destroyed. These weapons include:

In the console/PC version of Sonic Generations, the Gun Beetles appear as enemies. In this game, they can be found in City Escape, returning to firing single projectiles like in Sonic Adventure 2.

In the anime series Sonic X, the Gun Beetles debuted during the Sonic Adventure 2 adaptation saga. In this media, they were constructed after the Perfect Chaos incident to combat Dr. Eggman's forces. 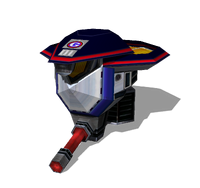 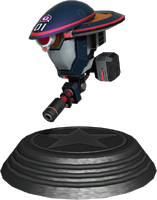