The Avatar in Guardian Rock.

This is an odd landscape with many factory buildings under the influence of Eggman Army adjacent to the Arsenal Pyramid. It seems that a powerful defense robot is also being built. So be careful!

Guardian Rock (ガーディアンロック, Gādianrokku?) is the twentieth stage in Sonic Forces, and the seventh stage in the game to be played as the Avatar.

Guardian Rock takes place in a section of the desert-fied Green Hill with many factory buildings under the influence of the Eggman Army adjacent to Arsenal Pyramid. During the events of the game, the Avatar came here to create a distraction that the Resistance needed to destroy the Death Egg.

Guardian Rock is an industrialized area in the once prosperous Green Hill area. In this stage there are block-based brown mountains in the background and a lightly clouded blue sky. Like the original Green Hill, the stage also features countless blocky hills in all manner of sizes and arrangements. Much of the stage is also covered in differently-striped grass that moves with the wind, and the soil itself is covered in brown checkerboard patterns. There are also a couple of wooden bridges over rivers of sand, and totem poles with all manners of facial expressions. However, the signature flora in Green Hill is shown to have dried out in various places, and the soil have in many locations assumed a sandy hue. Also, the area has been facilitated with semi-industrial pipe platforms and Badniks all around.

In the background of this stage, one can see the desert that sprouts out in Green Hill as a result of Eggman's desertification. These dunes have replaced the water areas in Guardian Rock, forming lakes and waterfalls made of sand. Also, in the horizon, one can spot the damaged Arsenal Pyramid from the earlier attack on it by the Resistance. A Death Crab also lurks in this area, which be can be seen crawling around in the background at various points in the stage, leading to areas where it is stomping the ground with its legs to try and crush anything that strays under them.

Seeking to take down the Death Egg in order to depower the Phantom Ruby with only one day left before Dr. Eggman's endgame begins, the Resistance needs to divert the attention of the Eggman Empire's forces away from the Chemical Plant for their plan to work. Believing that an assault from the Avatar will throw Eggman off since he will not be expecting it compared to if it was Sonic or one of his friends, the Resistance rookie is sent to Guardian Rock to cause a ruckus.

While the Avatar makes their way through Guardian Rock, the Resistance are notified of the menacing Death Crab that protects the facility in the proximity, which the Resistance soldiers cannot handle at the moment. After Amy has conducted an analysis of the robot, and Vector voices his disgust that Eggman had one more trick up his sleeve, Knuckles advises the Avatar to divert the Death Crab's attention and just run rampant through Eggman's forces.

After completing their mission, the Avatar is told to head back, only for the Death Crab to arrive and chase after them. However, the Avatar is able to defeat the gigantic robot by tying it up and leaving it to topple over and crash, completely disabled. With that, the Avatar makes their escape, and Green Hill soon is brought back under the control of the Resistance and freed of any influence of the Eggman Empire.

The majority of Guardian Rock is played from a 2.5D sidescrolling perspective. In terms of layout, the stage is pretty straight forward, as it consist of a straight main path with few alternate paths along it. Clusters of Rings can also be found in midair, which serve as guides to upper paths or Red Star Rings.

Like other Avatar stages, Guardian Rock has numerous Wisp Capsules with Wisps for fueling the Avatar's different Wispons. However, any Wisp Capsule containing Wisps that do not match any of the Wispons the player has currently obtained will be rendered intangible and transparent until the player obtains their Wisp's associated Wispon. This means, for example, that if the player does not have a Hover Wispon, then the capsules with Green Wisps will be unobtainable.

Unique obstacles in Guardian Rock are the Death Crab's legs. These limbs are encountered at various points, hanging just above the traversable routes the player follows. These legs periodically stomp into the ground or platforms, damaging anyone that gets caught underneath them. In some places, the legs' stomps can even destroy wooden bridges and create precipice from the sand. Besides obstacles, there also a large number of moving platforms that lead to higher paths.

When the stage begins (with the perspective starting out in 2.5D), keep going right on the main path to eventually arrived at the end of the stage. Along the way are areas both above and below the main path that the player can reach through the use of the Wispon, although most of them are short and ultimately rejoin the main path.

when the green rings that appear overlap, the greater the point bonus the player will receive. After the tied-up Death Crab trips, crashes through a rock and falls in defeat, the Avatar will automatically run towards and through the goal, clearing the stage. 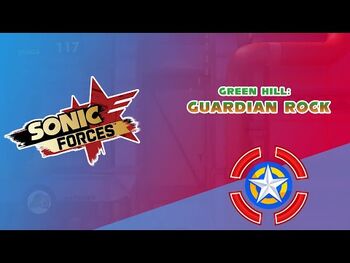