For other uses of the term, see Grounder (disambiguation).

It bursts from the walls to ambush Sonic.

The Grounder[1] (ハンドリル[2], Handoriru?, lit. "Handrill") is an enemy in the Sonic the Hedgehog series. It is a mass-produced, mole-based Badnik model created by Dr. Eggman and the successor of the Burrobots in terms of design.

Being successors of Burrobots, the Grounders are similar in design, but more bulky. They have red and broad bodies with two continuous tracks for legs. On their head they have two gray bolts for eyes, a white antenna on the back, and a large drill bit for a nose. They also have a yellow neckline, a blue button on their bellies, round shoulders with the early Eggman Empire symbol on them, and slightly smaller drill pits for forearms.

The first appearance of this Badnik was in the 16-bit version of Sonic the Hedgehog 2, where it served as an enemy. This time around, this Badnik is referred to as Grounder[1] (ハンドリル[2], Handoriru?, lit. "Handrill"). In this game, the player encounters them in Aquatic Ruin Zone.

In gameplay, the Grounders usually move back and forth on the ground or underwater while their drills are spinning. Though not dangerous on their own, Grounders are placed in very strategic places, such as at the top of paths above the player to block the way. They can also be hiding inside walls, only to suddenly emerge from them when the player passes them and hit them with a surprise attack. Regardless, the player can still easily destroy Grounders by with the Spin Attack or Spin Jump. Also, upon their destruction, they release an Animal.

Much like the Burrobots, the Grounders are equipped with drills that allows them to burrow through the ground, a skill of which they mainly use to drill through walls and hit their target.

Large variations of the Grounders appeared in Sonic the Hedgehog Yearbook 1992' story "Big Trouble". In this story, Sonic and Tails encountered a large Grounder as it bursted through a wall. The duo tried to damage it with the Spin Attack, only for it to bounce off of its shell harmlessly. Robotnik then announced to Sonic and Tails in his Eggmobile that this Grounder is the first of a new series of giant badniks whose size and strength would assure his conquest of Mobius where others had failed.

Tails wonders if they have to fall back, but Sonic refuses. With a little lateral thinking, Sonic and Tails climb to the top a column high above the Grounder. They then both leap down and hit the Grounder on the head with the Spin Attack, destroying it and releasing the three Animals that served as this Grounder's organic batteries.

In Fleetway's Sonic the Comic, the Grounders were a part of Dr. Robotnik's Badnik army. During his initial reign over Mobius, they were only utilized on one occasion: to help Robotnik break into Sonic's Secret Underground Base.

In the Adventures of Sonic the Hedgehog television series, a green Grounder serves as one of the main antagonists of the show. He was created as the younger "brother" of Scratch and is one of the main subordinates of Dr. Ivo Robotnik, created to be a part of the Super Special Sonic Search and Smash Squad whose purpose is to eliminate Sonic the Hedgehog and aid their creator in his various schemes. However, this Grounder is incredibly stupid and gullible, and often ended up causing his team and Robotnik more trouble for Robotnik's plans when trying to stop Sonic. However, he possesses various useful gadgets and an arsenal of weapons.

In the Sonic the Hedgehog comic series and its spin-offs published by Archie Comics, a Grounder based off the character from the Adventures of Sonic the Hedgehog television series served as a member of Dr. Ivo Robotnik's Super Special Sonic Search and Smash Squad. However, Grounder and his associates continuously failed their missions due to their limited AIs. Eventually, they were decommissioned, but eventually found new work as members of Mammoth Mogul's casino staff.

In the reality created by the Super Genesis Wave, the Grounder is a mass-produced Badnik model. A notable Grounder unit and his associates in particular once served as members of Dr. Eggman's Super Special Sonic Search and Smash Squad until they were solid to Breeze Media. The remaining Grounders would serve Eggman's army as rank-and-file soldiers.

In the Sonic the Hedgehog comic series and its spin-offs published by IDW Publishing, the Grounder is a mass-produced Badnik model created by Dr. Eggman. In this media, they look like their game counterparts from Sonic the Hedgehog 2 (16-bit). Their past is virtually identical to their game counterparts', up until after the events of Sonic Forces. 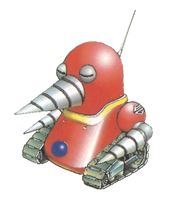 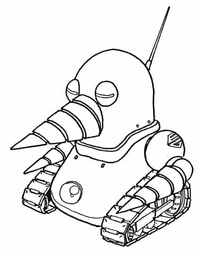