Tom Wachowski, the sheriff of the Green Hills Sheriff's Department, from Sonic the Hedgehog (film).

Before Sonic the Hedgehog (film)

The Green Hills Sheriff's Department is a group that appears in the Sonic the Hedgehog film series produced by Paramount Pictures and its spin-offs. It is the local police force and sheriff department stationed in Green Hills, Montana, with Tom Wachowski serving as the sheriff.

For more than fifty years, the Wachowski family has been part of the Green Hills Sheriff's Department. In the present day, Tom Wachowski would become the sheriff of the department. However, growing world-weary in his quiet little town, Tom sought to leave the Green Hills Sheriff's Department to move to San Francisco and join the San Francisco Police Department. There was not much going on in Green Hills either, as Tom would help the residents out with more mundane tasks, watch the local speed trap, or help ducks across the road. Tom would also be warned of the "Blue Devil", although Tom would dismiss it as a crazy man's tale.

Once, while Tom attended to his duties at the local speed trap, Wade would call Ton back to Green Hills to help retrieve a bagel from a duck.

Continuing with his duties as sheriff, Tom eventually received a letter from the San Francisco Police Department that admitting him to be a part of their police department. As such, while continuing his job as he and his family prepared to move to San Francisco, Tom would prepare his farewell speech to his department. When a blackout later hit Green Hills, several of its residents would call the Green Hills Sheriff's Department. Wade tried calling Tom for advice on how to manage the crisis, but did not get much out of his instructions. Later, Tom helped Sonic, an alien hedgehog chased by the government, escape from the evil Dr. Robotnik.

Later, Tom, now a fugitive from the law wanted for domestic terrorism, called the Green Hills Sheriff's Department. However, Dr. Robotnik, who had occupied the department with his agents and was surveying the call at the moment, took control of it and threatened Tom, only for the latter to hang up. Frustrated, the doctor left the department with his associates.

Several months later, Wade was instated as Green Hills' acting sheriff while Tom and Maddie went on a trip to Hawaii. While Wade was in charge however, he had his police car stolen by Tails, who ultimately drove it over a cliff during an escapade with Knuckles. Soon after, Wade would house Sonic and Tails before they headed to Siberia. The next day, Wade would patrol Green Hills on his scooter, during which he made a stop at the Mean Bean Coffee Café, only to discover that it was closed. Peaking it inside the café, Wade would apprehend Agent Stone, the owner of the café, after catching him using Dr. Robotnik's technology. Wade proceeded to try interrogating Stone in the café, with his bad cop/good cop routine failing to make Stone talk, until Robotnik teleported into the café in an empowered state and forced Wade to take Stone's place and get himself handcuffed inside the café. Soon after though, Tom returned to Green Hills with Maddie to help G.U.N. deal with Robotnik.

Sonic the Hedgehog: The Adventures of Sonic & Donut Lord

Feeling world-weary in Green Hills, Tom prepared to leave the Green Hills Sheriff's Department for San Francisco. On the day after a blackout hit Green Hills, Tom promised Wade during a phone call that he would do what he could during his remaining time as the town's sheriff before moving. However, he soon after met an alien named Sonic the Hedgehog, which led to a series of events that made Tom a fugitive pursued by Dr. Robotnik.[1]

Later, after Sonic defeated Robotnik, Tom had changed his mind and chose to remain as the sheriff of Green Hills.[1]

While out ice fishing, Tom and Wade received an all-points bulletin from from the Walla Walla authorities about an armed robbery at the First bank of Walla Walla. Answering the call, Tom and Wade headed there on behalf the Green Hills Sheriff's Department to provide tactical support. After meeting up with a female officer at the bank, however, some aerial Badniks showed up and began towing the bank's vault out of the building. Things then got crazy as the vault began spinning, prompting Tom and Wade to take cover with the others. Having had enough, Tom used his fishing pole to destroy two of the Badniks. Tom then went inside the bank to demand that the robbers surrendered, which they, much to his surprise, did almost immediately. While Wade was impressed, Tom worried that more Robotnik tech would show up and cause more trouble. Tom and Wade where then offered some hero donuts, only to discover that they had already been taken.[2] 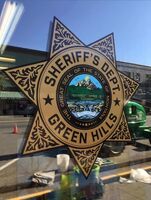 Emblem, from Sonic the Hedgehog (film).