This article is about the Zone from the 16-bit version of Sonic the Hedgehog. For other uses, see Green Hill (disambiguation).

Sonic in Green Hill Zone, from Sonic the Hedgehog (1991).

Go around the giant loop, tumble down tunnels, and jump over crumbling cliffs before you get a chance to blink. Bounce on Spring-boards but not on spikes. Ouch!

Green Hill Zone is a peaceful and natural region. The background of the Zone features sharp hills, green forests and waterfalls on the other side of a bright lake. Green Hill Zone also includes tall palm trees, bright moving flowers, hard pointed bushes and different types of totem poles with several facial expressions. There are also bright blue uncanny blocks set along the paths. Most of the ground of the Zone is covered in green grass and the soil itself is covered in checkerboard patterns in different shades of brown. There are also several log bridges, which can have waterfalls below them, stretching over gaps on the paths.

Green Hill Zone was one of the many regions on South Island affected by Dr. Robotnik during his quest for the six Chaos Emeralds. There, the doctor kidnapped the local Animals and used some of them to power his Badniks, while leaving the rest of them in huge Capsules. When Sonic the Hedgehog arrived at the Zone however, he saved the Animals and defeated Robotnik in his Egg Mobile-H.

Much time later, Sonic came back to Green Hill Zone, where he reunited with the Animals and used the six Chaos Emeralds he had collected to fill the Zone with flowers, thus ending his adventure.

Green Hill Zone is a fast-paced Zone in the game and has numerous features and obstacles. Some palm trees can contain hidden monitors and springs. Many portions on the cliff edges in the Zone's structure are weak and will collapse when the player steps on them just once. There are also platforms attached on chains that swing in horizontal directions. These platforms are useful when the player has to cross hazardous gap sections, such as spike fields. The player may also come across walls which can be broken through by gaining enough running speed and/or using the Spin Attack. Behind these walls the player can find hidden or alternate pathways.

There are many pathways in the Zone to choose, whether if the player wants to go along the higher route with numerous floating platforms, the basic center route, or the lower pathway which is the most dangerous. The player can reach the top of high hills by using higher pathways or climbing up from below using certain routes. The center route and the lower pathway contains more platforming sections that go over areas covered in spikes and bottomless pits.

There are automatic curling tunnels that go through large hills and sends the player curling through tunnels at high speed. Once getting out on the other side of these tunnels, the player cannot backtrack through them, unless he/she can gain enough speed by using red springs or performing the Spin Dash (only in re-releases of the game). Green Hill Zone Act 3 features long, rotating spiked logs above waterfalls. Here, the player has to avoid the rotating spiky parts of the log by jumping. These sections have also horizontally swinging platforms to help the player over spiked logs.

The player starts out on a straightforward path that has first features log bridges, a small ramp and upward-going hill with two Crabmeats. It is not until when the player falls down after the second waterfall and log bridge that the lower pathway opens up with many sets of spikes and four monitors with Super Rings and Invincible near the end of the pathway. The higher pathway starts from the first lamppost, featuring many platforms and goes above the center route's loop which has a Shield monitor on it. The higher pathway then divides into two routes: the first route, which goes even higher, is on the top of the tall hill and features a long line of Rings before ending on a series of platforms on the other side. The second route has Newtrons and a small curling tunnel that leads to the other side of a large hill with the higher pathway.

If the player stays on the center route and goes through a loop and two curling tunnels, he/she gets sent high into mid-air by a small ramp. In the mid-air there are huge amount Rings floating. The player will then fall down on the higher pathway on top of the hill with a single log bridge. The lower pathway has several spike and Badnik placements and leads straight to the end of the Zone.

Act 2 begins near a log bridge and waterfall. Below the log bridge, there are Super Ring and Shield monitors which the player can reach by doing a small jump between the spikes and the upper ground on the right side of the waterfall. The player can get out of the place with the hidden monitors by breaking the wall on the right. The upper pathway continues to a place with a horizontal platform and a large ramp by crossing upper and lower pathways. If the player backtracks on the lower pathway, he/she will end up on a more dangerous route with spikes and Badniks. The upper pathway continues through the loop and ends up on a straight and forward platforming section with moving pillars over spike fields.

After this section, the player travels through a large hill and another waterfall with a log bridge where the route again splits into two paths. However the player can also keep going to the faster route to the right which leads into a curling tunnel and the end of the Act. The lower and serpentine route has dangerous spike pits and more Badniks to get through.

The Act begins at the split of the path which leads to two higher paths and one lower path. While the higher route is faster and splits into two other routes at the mid-point, the lower pathway has a breakable wall and a long curling tunnel that go to the lower part of the act. There are numerous Badniks and spike placements, while one bottomless pit is set at the mid-point of the route. At the end of the lower pathway, if the player skips the yellow spring and jumps over the spring and the spikes to the waterfall, the player will end in a hidden place with several Super Ring monitors and a 1-Up monitor located on the right.

The two upper pathways have platforms and two rotating spiked log sections. After one of the spiked log sections on the center route, the player has to either break through a wall or use a hidden Spring and platform to get to the higher pathway in order to pass a tall hill. After crossing the last spike pit, the player enters a straight road to the boss, the Egg-Mobile H. 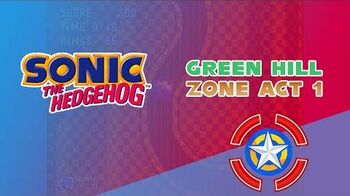 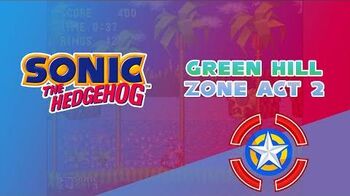 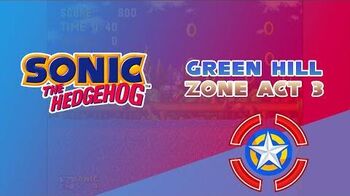