Some tropical hills located above a cave system.

Welcome to Green Hill Zone as you've never seen it before! Explore the vistas, ziplines, and tropical pools of the newly-revealed Act 2.

In Act 1, Green Hill Zone is a slightly modified version of its counterpart's first three Acts from the original Sonic the Hedgehog. Presented as a tropical area taking place underneath a clean, light blue sky with white clouds, it is full of moving flowers that take the appearance of either sun flowers or lavender flowers. Also decorating this area are thin, tall palm trees, lavender stones, and Totem poles. The soil is brown and has a checkered pattern on it, and is covered by lime grass with slightly darker lines on it. In the background, a clean, blue lake is seen in front of some short and spiky mountains with waterfalls coming out of them. The foreground also features one wooden bridge after another. Also, underneath this area, there is a series of brown caves that are slightly flooded with water and features visible stone stalactites and stalagmites. These underground areas are not very dark, as a lot of sunlight shines into them. The Act itself also ends in a cave with a beautiful subterranean lake in the background and small rock formations. This Act mainly consists of hills that are varying degrees of steep, and hills of varying heights, often leading to higher sections in the Act.

In Act 2, the foreground is pretty much the same. However, the mountains in the background are now much closer and smoother, with numerous visible waterfalls and caves underneath them, pointy mountaintops, and totems in front of them. This section of the Zone also has very tall areas, which are connected to each other by ziplines and wooden bridges. The lower areas of the Act are set in caves that are more complex than those in Act 1. These caves have rocky floors with smaller vegetation and rock formations, but are otherwise no different from those seen in Act 1. There are as well new models of totems in these depths, albeit larger, but otherwise following the same patterns as the smaller ones. Also, at the bottom of Act 2, there are subterranean lakes.

In Encore Mode, Green Hill Zone looks similar as in Mania Mode, except that it has an orange sky and almost all of the area exhibits a strong yellowish hue matching the sky.

Sonic the Hedgehog, Miles "Tails" Prower and Knuckles the Echidna are all transported to Green Hill Zone by the Hard Boiled Heavies after an attempt to stop them from using the Phantom Ruby the robots excavated on Angel Island. After racing through the Zone, and overcoming the DD Wrecker along the way, they are eventually met by Dr. Eggman in his all-new Death Egg Robot mech. The trio manages to defeat him though, and follow him into the hole he fell into upon his defeat. There, they see Eggman take the Phantom Ruby from the Hard Boiled Heavies after they refuse to obey him and hand over the Ruby. With the Hard Boiled Heavies having fled the scene, the evil doctor uses the Ruby to transport the trio to Chemical Plant Zone.

A while after overcoming the DD Wrecker, Sonic, Tails, Knuckles, Mighty and Ray get attacked by Dr. Eggman, who is armed with his Death Egg Robot. Defeating Eggman nonetheless, Sonic and his crew follow the doctor into the hole he fell into upon his defeat. On the bottom of that hole, they find Eggman taking the Phantom Ruby from the Hard Boiled Heavies after they (again) refuse to obey him and hand over the Ruby. The heroes are then sent to Chemical Plant Zone by Eggman when he uses the Phantom Ruby, after the Hard Boiled Heavies have fled.

Most of the gimmicks in Green Hill Zone (especially in Act 1) are taken from its counterpart from the original Sonic the Hedgehog. Common elements in the Zone are rocks that can be pushed aside to reveal secrets. Another returning gimmick is the rotating spiky bridge which the player need to cross carefully. These spiky bridges can be burned if the playable character is wearing the Fire Shield. The new pathways in Act 1 also introduce floating, moving platforms with Springs on them and shallow underwater areas with no Air Bubbles in them that are infested with Choppers and Crabmeats. Act 2 makes more use of the new gimmicks than Act 1. It also introduces ziplines which are an easy way to travel between high areas. There are also many walls that can only be broken by Knuckles, although some of them can also be destroyed by the Fireball Spin Dash.

Many edges on some of the hills also crumble apart when stepped on, so the player must be careful. There are also hidden chambers that can sometimes be found inside walls. Some of the entrances to these chambers are blocked by stones that can be moved. There are also floating platforms that can move or collapse when the playable character makes contact with them. In addition to them are also swinging platforms. In the lower sections of this Zone are also rising, vertical platforms, which mainly allow one to move across spike pits. In some sections in the caves though, they serve as additional hills.

Across the landscape are various loops from the original Zone, as well as tunnels. There are also corkscrew paths that appear in the upper section of the Zones. There are also often bridges leading over waterfalls, where the player has to watch out for Choppers that pop up from below.

In Act 2, flying wooden platforms have been added. Bodies of water are also more common here, even in the highest sections. In addition, all previous gameplay elements from Act 1 are kept.

The first part of Green Hill Zone Act 1 is very similar to the first Act of the original Green Hill Zone until near what would have been the end. At that point, the Zone presents a couple of areas taken from Act 2. Many new pathways are introduced as well, both underground and in high points, which also make use of new obstacles. Eventually, the player will use a tunnel to be taken to a cave where the battle against the DD Wrecker begins.

If the player is playing as Knuckles in Mania Mode, Act 1 begins in a cave. Here, the player will have to take advantage of Knuckles' abilities to continue. Eventually, they will be taken to the surface of the Zone, where they will be able to continue the Act as with any other character.

In Encore Mode, Act 1 uses a similar layout, except that it starts on the surface for all characters. Some gimmicks are either modified, added or removed to make the Act slightly harder. Also, at the start of the Act, there is an area Mighty can burrow through with the Hammer Drop to gain access to where Knuckles would have started the Act in Mania Mode.

Green Hill Zone Act 2 begins in the cave at the end of Act 1. After that, they will go to the surface, whose layout is similar to Act 3 of the original Green Hill Zone. After that, the Act will make heavy use of the gimmicks that were introduced in the new pathways of Act 1, as well as ziplines. Act 2 is divided into several different paths, the lower ones being slower and more dangerous, and the top ones having more items and being more open.

In Encore Mode, the level layout of Act 2 remains mostly the same, except that some parts have been slightly modified.

The boss of Green Hill Zone Act 1 is the DD Wrecker, a robot consisting of two mini Dr. Eggman-like satellites linked by a chain. This boss attacks by swinging around its satellites. During its attack patterns, either one of the satellites will heat up and become immune to damage. To defeat it, the player must attack its satellites. After destroying one satellite, the remaining one will bounce around until the player destroys it too.

The boss of Green Hill Zone Act 2 is the Death Egg Robot itself. When the boss fight begins, it will slam down into the ground, and then it starts chasing the player across the plains of Green Hill, occasionally launching out its claw or bombs. It takes eight hits to defeat, and it speeds up after the sixth hit. If the player takes too long to beat this boss, they will arrive at a cliff that ends with a bottomless pit. 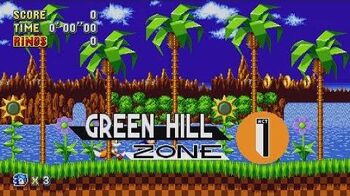