Green Hill Zone appears as the first Zone in the 2012 remake of Sonic Jump and later appeared in Sonic Jump Fever.

Much like the Green Hill Zone that appeared in past numerous installments, Green Hill Zone is presented as an iconic nature paradise with checkered brown soil. In the background, tall hills with a giant waterfall flowing through it can be seen. Sometimes, the iconic checkered loop-de-loop can also be seen. The small platforms basically consists of the green grass with a partial portion of the soil. Aesthetics on the platforms of the Zone include small colorful flowers, a small wooden fence, a large sunflower or a totem pole.

The player can touch sunflowers and totem poles to earn points and keep the Combo going in Sonic Jump Fever. Some platforms though will have a buzz saw blade or a pit of Spikes that serve as obstacles which can harm the player causing him/her to fall off-screen. There are also platforms that flip around at certain intervals causing the player to fall through them while they are upside down. There are also swingsets of platforms that periodically swing and change positions.

In Sonic Jump, the Zone consists of eleven Acts and a boss fight while in Sonic Jump Fever, there are multiple level layouts in terms of the position of the enemies, platforms and objects and the player can play this Zone as many times possible during a period of two days before the game switches to Mechanical Zone. 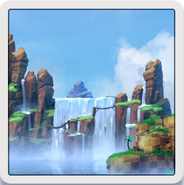 Sonic at Green Hill Zone in Sonic Jump (2012).
Add a photo to this gallery