Is it me, or is that place we were just in awfully familiar?

Green Hill (グリーンヒル, Gurīn Hiru?) is the first Stage in both the console/PC version and Nintendo 3DS version of Sonic Generations. This level is a re-imagination of Green Hill Zone from the original Sonic the Hedgehog for the Sega Mega Drive, and part of Classic era.

Green Hill is a beautiful landscape with lots of nature, with a scenery that is much larger in proportion to Sonic's size. The soil is brown and, notably, has a checker pattern on it. It is also covered by a thick layer of lime grass on the top with green lines. This stage is overflowing with fauna, as evidenced by the various flowers and palm trees adorning it. Some of these flowers are tall sunflowers that have their flowers spinning around their axes. The palm trees in particular are even taller, with a single, large coconut at the top of their trunks with some geometrical leaves on it. Green Hill also has very tall mountains with large waterfalls and giant caves. Artificial signs in this stage include totems of various types and sizes, wooden bridges, and small fences at the cliffs; while the scenery is mostly made of loops, tunnels (in Green Hill Act 1), and Grind Rails (in Green Hill Act 2).

In the Nintendo 3DS version of Sonic Generations, Green Hill looks pretty much the same, except that it is designed more in accordance to the original Green Hill Zone. Compared to the console/PC version, the scenery of the stage is much smaller and simpler, the background showing a large lake and a chain of small, brown mountains behind it. The soil here is much brighter, sporting a beige/yellowish tone, and is covered by a thinner layer of grass.

While traveling through the Green Hill of his world, Classic Sonic senses a brief earthquake and is soon attacked by the Time Eater.

A version of Green Hill from somewhere in spacetime would soon after be sent to White Space, devoid of any color and life. Noticing the region after ending up in White Space, Modern Sonic races through this version of Green Hill, which regains color and life after Sonic has finished exploring it. This, in turn, also restores Tails, who had been turned into a statue by the Time Eater, back to normal as well.

In general, Green Hill is a very fast-paced and open stage, though it also has several obstacles and hazards.

Green Hill Act 1 features various of the elements the original Green Hill Zone had, including loops and tunnels, as well as the corkscrews introduced in Emerald Hill Zone in Sonic the Hedgehog 2. There are also a few platforming sections, and the stage in general is split into various paths to take. There are also platforms hanging in the air, which collapse a moment after Classic Sonic lands on them them. The Act also features wooden structures with swinging platforms attached to them. When Classic Sonic stands on them, they will move left and right.

Green Hill Act 2 is geared towards faster gameplay on a lot of grass-covered routes, and uses gameplay elements from the stages in the Xbox 360/PlayStation 3 version of Sonic Unleashed. Most of the stage is 3D, though there are a few 2.5D sections as well. Because of Modern Sonic's fast-paced gameplay style, combined with the 3D sections, wooden fences have been added on the sides of the platforms in said sections to prevent the player from falling off. Various sections feature gimmicks and obstacles that force the player to make use of Modern Sonic's abilities, including Wall Jump Blocks, cracks for sliding through, Trick Jump Panels, Dash Rings, Spring Poles, and Grind Rails. In addition, various scenery parts, including the loops and the corkscrews, have also been made automatic and longer in comparison to Green Hill Act 1. The collapsing platforms from Green Hill Act 1 also appear here. The Act also features short purple steps that Modern Sonic can trip over if he runs into them, causing him to stumble and lose speed, unless he jumps over them.

In the Nintendo 3DS version of Sonic Generations, Green Hill features almost all of the aforementioned gameplay gimmicks, except that the 3D sections are not present in Green Hill Act 2. In terms of gameplay, Act 1 features moving platforms and stones that can be destroyed by Spin Jumping on them. Green Hill Act 2 on the other hand has more gimmicks and obstacles. Here, there are Grind Rails, larger loops, and small totem poles collapsing onto the road when Modern Sonic approaches. However, these totem poles can be targeted with the Homing Attack, thus allowing the player to skip across them without risking them hitting Modern Sonic. In some cases, these collapsing totem poles can even be used to reach higher routes, which are usually faster than lower routes. Like in the console/PC version of this stage, segments of Green Hill Act 2's cliffs will also collapse shortly after Modern Sonic steps on them.

Green Hill Act 1 remains fairly true to the original Green Hill Zone, but has a few additional sections. The beginning of the Act is almost identical to the original: the player will meet a Moto Bug and Buzzer that will be flying around a small hill near the start. From there, the Act is rather simple, with few gaps and opponents along the way. The rest of the Act makes use of various new elements and is split in numerous pathways. The upper paths lead along the Act's green hills and grassy tracks, while The lower lead through caves where spikes are an extremely common obstacle.

Between the lower and upper sections of the Acts are wooden structures with the swinging wooden platforms. Also, in addition to the usual loops and tunnels in the ground, there are corkscrews. Eventually, Act 1 ends with a long, flat path that ends at the Goal Plate.

Green Hill Act 2 opens up with a long path with several curves, Badniks, and Grind Rails. This section can easily be traversed by Boosting. Next, the player will run along a wooden bridge and platforms in a 2.5D section, after which Modern Sonic uses a Trick Jump Panel that leads him into a cave flooded with water. From there, Sonic will be grinding along a set of three yellow Grind Rails with Dash Rings along them to keep him from falling into the water. After a while however, a Giant Chopper will emerge from the water in the cave, destroying the Grind Rails behind Sonic as he moves forward. Eventually Sonic will jump onto a single Grind Rail that will writhe up through an opening in the cave's ceiling. At the top, Sonic will then will jump off the Grind Rail and through a Rainbow Ring while a Mega Chopper jumps after him. Eventually though, the Giant Chopper falls back into the water without eating Sonic, while Sonic lands on solid ground to continue his run.

After landing, the player will have to travel through a second 2.5D section, excepting this time the section is longer than the one before. It will lead across crumbling platforms and will take the player up shafts using Spring Poles. Eventually, the Act ends on a straight road in a 3D perspective with small turns along it and occasional cracks through which the player has to slide through. A single step for Modern Sonic to trip over also appear along this road. Finally, the path will lead down to a circular and fenced grassland surrounded by flowers and with a Goal Ring in the center.

When reaching the end of the Act, a giant totem pole will appear and begin collapsing on top of Modern Sonic. In order to avoid getting crushed by this totem pole, the player has to use the Boost to outrun it. After that, the player will arrive at the Goal Ring. 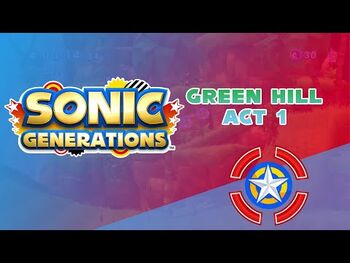 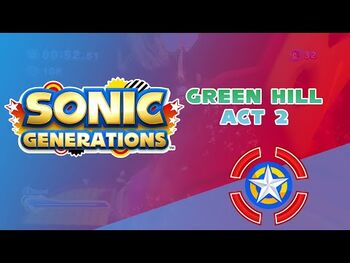 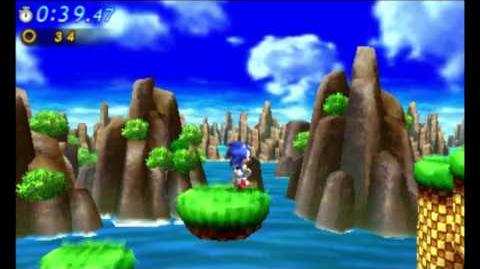 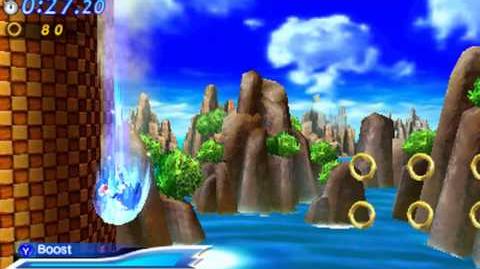