A part of the jungle on Prison Island.

Blows up? I've got to get outta here and find Amy and Tails right away!

The stage is similar to Shadow's White Jungle in appearance, as they both take place in the jungle. The stage is occupied by G.U.N. robots, and there are also hidden locations within.

After Sonic comes to a standstill fighting against Shadow, Shadow gets a call from Dr. Eggman, who tells him that Prison Island is about to blow up. Upon hearing this, Sonic realizes that he needs to save Amy and Tails and get off the island. Shadow leaves, and Sonic has exactly eight minutes to escape.

Most of the sstage takes place in a forest. There are several types of branches to be swung on.

1st Mission: Escape from the Island in 8 minutes!

Sonic must escape from Green Forest within eight minutes. This is plenty of time to accomplish the mission, and Sonic can get the Ancient Light from here.

This 100 Ring mission is not very difficult, as most of the Rings are placed in a straight line. Sonic must avoid the many G.U.N. robots that tend to appear right on top of him.

In addition to the Mystic Melody, Sonic will also need the Bounce Bracelet from Pyramid Cave in order to complete this mission. Right before the third Point Marker, Sonic must quickly jump onto a platform and jump off backward to end up on a platform with the Ancient Ruin on it. Sonic can then play the Mystic Melody to make a platform appear, then Bounce Attack onto the platforms. After that, Homing Attack across some enemies to get to the platform with the lost Chao on it.

This mission is fairly simple, as Green Forest itself can be completed within just over three minutes.

Green Forest undergoes some changes that make it a little tougher to complete. The long vine runs are now lined with Iron balls and the platforms at the end sink much faster. The Bounce Bracelet will make this stage slightly easier to complete.

After the second Point Marker and past the Vine, the player should move to the other side where the third Point Marker is and Spin Dash up the hill to reach a small floating platform above. They must then charge a Spin Dash and release the button to the left to reach the platform where Big is fishing. 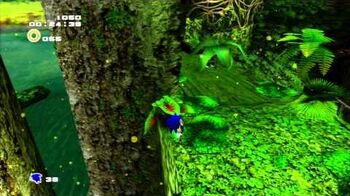 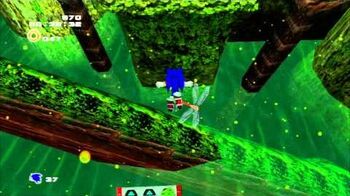 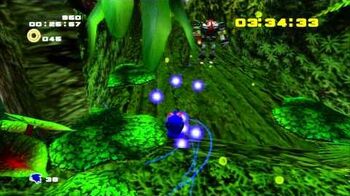 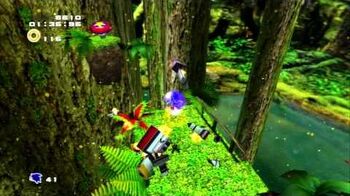