The Great Forest[1] is a location that appears in the Sonic the Hedgehog television series. It is a massive wooded area beyond Robotropolis. It acts as a safe haven for the residents who managed to escape Mobotropolis during Dr. Robotnik's military coup; Knothole was built deep within the forest and remains hidden there. For many years, the forest has acted as the home for the Knothole Freedom Fighters

The Great Forest is a large wooden forest region near Robotropolis. It is noticeable fo hosting the hidden village of Knothole and the Lake of Rings next to it. The Great River also flows through the forest.

The Great Forest is mostly intact, though Dr. Robotnik has cut down the trees in some regions, leaving barren glades in their places.[2]

Using the Shredder, Snively began cutting down trees in the Great Forest and harvesting the fallen trees' life force, which was needed for powering Dr. Robotnik's Sonic Radar. However, the Shredder was destroyed by Sonic. Later, Antoine tricked Robotnik into meeting up with him in the Great Forest. Using a Power Ring Antoine lured Robotnik into a trap. However, Robotnik quickly escaped and captured Antoine and took the Power Ring. Later, Robotnik and his army of Swat-Bots came to the Great Forest with a second Shredder and sat up the Sonic Radar in the forest. However, Sonic and Antoine destroyed Shredder and tricked Robotnik into destroying his own Sonic Radar. Antoine then retrieved the Power Ring Robotnik took, thus allowing Sonic and to make a quick getaway.[2] Griff later drove Sonic, Sally and Antoine back to Knothole Village, only for his Hover Sled to seemingly break down after they arrived in the Great Forest. Sally thus offered Griff to spend the night in Knothole Village, which Griff accepted, and left his Hover Sled behind in the Great Forest. It soon turned out, however, that Griff's Hover Sled was not broken at all, and Griff used it to drive away after stealing the Power Rock from the Lake of Rings. Discovering the theft, Sonic ran after Griff and managed to retrieve the majority of the Power Rock.[4]

Antoine eventually met the Nasty Hyenas in Great Forest, who, to his surprise, made him their king. After finding Antoine, the Knothole Freedom Fighters tried to convince him to return home with them, but failed. However, they would later rescue Antoine when the Nasty Hyenas tried to cook him.[11] Sometime later, Sonic trained Tails in tracking with the aid of Antoine. While tracking Antoine in the Great Forest though, Antoine would insists that he saw a ghost when Sonic and Tails found him. That same night, the trio decided to set up camp in the woods. As they fell asleep, Tails noticed what seemed like a glowing ghost, and Sonic went to investigate. While Sonic was checking out who the ghost was, Tails got lost in the woods until he was found by Sonic and Antoine. As it turned out, Antoine was the ghost, with the glowing stemming from some glowing moss he had gotten himself covered in. The next day, Sonic, Tails and Antoine packed up their camp. However, they got scared off after Tails found a medallion in the middle of the forest that belonged to a character in a ghost story Sonic had told: the Gopher Highwayman.[12] The Great Forest was later attacked by a Doomsday Pod, which was programmed to destroy all life in the area. Fortunately, Sonic managed to destroy the Doomsday Pod. Later, the Freedom Fighters managed to destroy the Doomsday Machine and defeat Robotnik for good, making the Great Forest safe again.[13]

In the Sonic the Hedgehog comic series and its spin-offs published by Archie Comics, the Great Forest was a broadleaf forest that dominated most of the Northamer continent. Many trees were hundreds of years old, especially at the center. It was so large and so thick that it concealed the shallow Great Valley from aerial view. It was in the Great Valley that Knothole Village, the homebase of the Knothole Freedom Fighters, was located.

After the Super Genesis Wave rebooted the multiverse, the Great Forest was replaced with the Wood Zone. 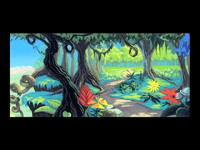 Retrieved from "https://sonic.fandom.com/wiki/Great_Forest_(SatAM)?oldid=2343261"
Community content is available under CC-BY-SA unless otherwise noted.