Great Eastern Entertainment, Inc. (or GEE) is a licensed manufacturer of animation and entertainment merchandise. Starting in the early 2000's, they have been making merchandise for Sonic related series', most notably of plush toys.

In promotion of Sonic X, GEE made various merchandise for the series including plush toys, playing cards and posters.

GEE has made various merchandise based on the main Sonic the Hedgehog series, including plushes, posters, home decor, hats, accessories and more.[1]

GEE has produced many plush toys of Sonic characters, and it is currently the company that has produced some of the most, if not the most, plush toys of characters from the series. In April 2017, GEE lost the license to make Sonic plushes because Tomy was producing them at the time.[2] On 20 November the following year, GEE announced they would return to producing plushes for the Sonic series.[3] 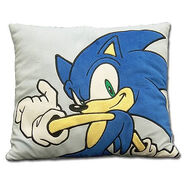 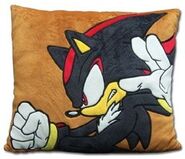 Shadow
Add a photo to this gallery

Starting in 2009, GEE started releasing Sonic merchandise in the "Classic" Sonic the Hedgehog style from the 1990's. The range includes various items like plushes, accessories and posters.[4]