A Gray Wisp, from the Nintendo 3DS version of Sonic Lost World.

The Gray Wisp (グレイウィスプ, Gurei U~isupu?) is a creature that appears in the Sonic the Hedgehog series. It is a type of Wisp that grants the Gray Quake Color Power.

The Gray Wisps' overall appearance resembles that of a rock. Their bodies are in the shape of a boulder and a tetradecahedron, looking similar to a rough rock. They also have three regular octahedron-shaped tentacles stemming from under their bodies and have three pink eyes arranged in a triangle.

In Team Sonic Racing, the Gray Wisps appear as Item Box power-ups on the game's race tracks. In gameplay, the Gray Wisp power-ups allow the user to create harmful stone pillars on the racetracks with the Gray Quake for the rival racers to drive into.

In the comic tie-in, during one of the early races in Dodon Pa's Grand Prix, a Gray Wisp was used by Silver as a part of a collaboration attack on Dr. Eggman, who had intruded on Team Sonic and Team Dark's race.[1]

The Gray Wisps are able to levitate in midair at will, which serves as their main method of transportation.

Like all Wisps, the Gray Wisps are able to generate and store their own unique variant of a powerful energy known as Hyper-go-on inside their own bodies, which doubles as their life source. It is unclear to what extent they can use their own Hyper-go-on. 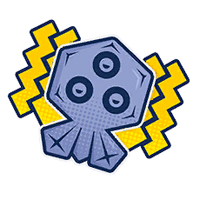