Sonic as the Gray Quake, from the Nintendo 3DS version of Sonic Lost World.

The Gray Quake (グレイ・クエイク, Gurei Kueiku?) is a transformation that appears in the Sonic the Hedgehog series. It is the Color Power gained by absorbing a Gray Wisp and its Hyper-go-on, which turns the user into an iron ball.

When using the Gray Quake, the user transforms into a gray iron ball with yellow eyes. In Sonic's case, his entire body turns into a gray rhombicuboctahedron which only shows his eyes, albeit without pupils and colored pale yellow, which take up two squares on the surface and are connected by a small string.

The Gray Quake made its first appearance in the Wii U version and Nintendo 3DS version of Sonic Lost World. In the Wii U version, it is only usable in Two-Player-Race Mode, where it stuns the opponent for a few seconds when used. In the Nintendo 3DS version, it can first be used in Silent Forest Zone 1. In gameplay, using the Gray Quake turns the user into an iron ball that moves forward automatically: they can also both plow through gray-checkered walls and damage enemies upon touch, though the user can still take damage from obstacles such as iron balls. It can also damage all surrounding enemies and obstacles (including airborne ones) by slamming the ground, cross quicksand and green sludge without losing speed, and climb straight up walls by rolling into them.

during a jump to slam into the ground and damage all surrounding enemies and obstacles.

To use the Gray Quake in gameplay, the player has to press

while in possession of a Gray Wisp. Once activated, the player releases the Gray Wisp, who will fly ahead of all the competitors on the race track. Eventually, it will stop a set distance ahead of the leading racer. Shortly thereafter, several stone pillars will emerge from the ground on the road. These stone pillars will damage any racers who collide with them, except for the user and their teammates. It is also possible to bypass or otherwise destroy these stone pillars with Wisp power-ups, Invincibility or the Team Ultimate. Otherwise, avoiding the stone pillars is a daunting but possible task. Also, activating the Gray Quake can change the pace of the race at once.

As the Gray Quake, the user's body density is greatly increased, making them so heavy that jumping or falling down on the ground can create destructive shockwaves across the area that are powerful enough to tear apart robots and break down the environment. The Gray Quake also possesses wall-crawling abilities, allowing the user to scale walls despite their weight in this form.

The main drawback of the Gray Quake is that it can only be used for a few seconds and requires more Hyper-go-on from Gray Wisps to be maintained. 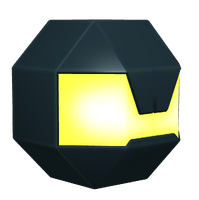