Now for the real test! All of you are about to enter Eggman's territory. Are you ready?

Grand Metropolis is the third stage in Sonic Heroes, following the battle with the Egg Hawk.

This futuristic city appears to be controlled by the monopolistic "HEXAeco" energy company, as a majority of the tall buildings and roadways are powered by them.

After his defeat at Ocean Palace, Dr. Eggman has fled into the city and taken over the industry to steal their energy, so Team Sonic sets out to release it from his control. Team Dark realizes that the city must be crushed and be rid of the doctor's robot army swarming the city, which would also happen to free it. Team Rose continues to follow Amy on her quest to find Sonic, whom she correctly believes to be in the city. Lastly, Team Chaotix must destroy all of the robots in the city on the orders of their mysterious client, meaning that Neo Metal Sonic took over the city instead, showing that it must have been a valuable asset to him.

For this assignment, Team Chaotix are told to destroy all 85 of Eggman's robots around the stage. By the first Check Point, 18 out of the 85 enemies have been passed. Check Point #2 brings that count up to 31/85, and it reaches 63/85 at the third. The player should have defeated 73 total enemies once they pass the fourth Check Point, and once they hit the final stretch all 85 enemies have been accessible. If the player has missed any enemies along the way, Charmy can use a Warp Flower at the end of the stage and teleport back to the beginning.

The extra mission's goal is the same as the first's, but with an eight-minute time limit.

In the Wii version of Mario & Sonic at the London 2012 Olympic Games, Grand Metropolis is featured as the setting of the Dream Uneven Bars event. During the event, a remix of the background theme plays. 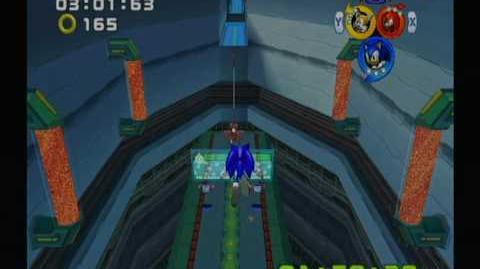 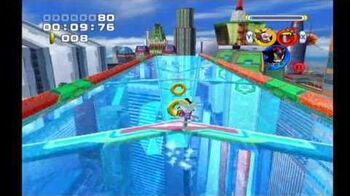 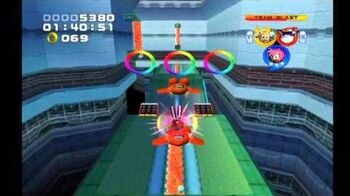 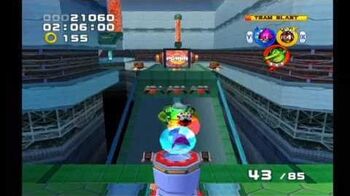 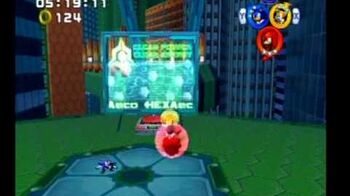