For other uses, see Grabber (disambiguation).

A Grabber, from the Wii U version of Sonic Lost World.

It drops from the ceiling, grasping its prey before exploding.

The Grabber[1] (グラバー[2], Gurabā?) is an enemy that appears in the Sonic the Hedgehog series. It is a mass-produced, tarantula-based Badnik model created by Dr. Eggman. Grabbers can be found hanging on ceilings, where they will drop down and grab their targets from above.

Grabbers strongly resemble tarantulas. Their main body has yellow and black stripes that flash red and black as they are about to self-destruct. On their backs is also a wheel which they use to move on ceilings. They also have a round black head with two black eyes and white mandibles. They possess as well eight long, mechanical limbs, four on each side, on the bottom of their bodies.

In Sonic Generations, Grabbers were redesigned. In addition to appearing larger, they were given black limbs and cyan eyes with black pupils and two smaller eyes above each of them. The wheel on their backs were also removed. In Sonic Lost World, Grabbers returned to their original design, except with cyan irises and additional, smaller eyes.

The first appearance of this Badnik was in Sonic the Hedgehog 2 (16-bit), where it served as an enemy. This time around, this Badnik is referred to as Grabber[1] (グラバー[2], Gurabā?). In this game, the player encounters them in Chemical Plant Zone. They are located in the hall sections of the Zone, where one or two of these Badniks hang from ceilings.

In gameplay, Grabbers glide along the ceilings, waiting for the player to come. Once a playable character gets below a Grabber, it drops down and grabs him, causing damage. Upon getting a hold of the player, the Grabber starts flashing for few seconds before self-detonating, destroying both itself and its Animal, and dealing further damage to the player. One way to escape a Grabber's hold is by pressing left and right repeatedly on

. Alternatively, if Tails is with Sonic, he can try to destroy the Grabber before it explodes.

It is best to attack Grabbers from the side with the Spin Jump rather from down below, because the player may risk being captured by them. Also, upon a Grabber's destruction, it releases an Animal.

In the console/PC version of Sonic Generations, Grabbers from somewhere across spacetime appear as enemies. In this game, they are encountered in both Acts of Chemical Plant, and are located in the hall sections of the Stage. Though they received an updated design in this title, they retain the same attack patterns from their previous game.

In gameplay, Grabbers are able to crawl along the ground as well as hanging from the ceiling. Like in the previous game, if the player is grabbed, they can break free before the Grabber self-destructs. Destroying a Grabber will also not release an Animal.

In the Wii U version, PC version and Nintendo 3DS version of Sonic Lost World, the Grabbers appear as enemies. During the games' events, the Grabbers and Dr. Eggman's other Badniks got hijacked by the Deadly Six.

In the Wii U/PC version, Grabbers appear in Desert Ruins Zone 1 and Silent Forest Zone 4. Otherwise, they retain their attack patterns from previous games. On this version, Grabbers can only be destroyed by luring them down and then hitting them with a Bound Jump, as they cannot be locked-on to by attacks. In Desert Ruins Zone 1, a trail of Rings appear after they are defeated, while in Silent Forest, they sometimes give the player one Ring after being destroyed.

In the Nintendo 3DS version, Grabbers can be found specifically Windy Hill Zone 2 and Desert Ruins Zone 2. In gameplay, they appear along linear route sections, where up to three of them will hang on the roof in row. Otherwise, they retain their attack patterns from previous games. The player can destroy these Badniks using the Homing Attack.

When a Grabber is properly destroyed in any of the versions of Sonic Lost World, it will release an Animal.

Grabbers can hang from ceilings using incredibly strong and durable wires. When they manage to catch their prey in their grasp, they are able to self-destruct to inflict damage to their captive.

In the Sonic the Comic series published by Fleetway Editions, the Grabbers are a part of Robotnik's Badnik army. Depending on the artist, the Grabbers' appearance would be different for each issue. They were usually stationed in underground caves and Robotnik's facilities where they would catch intruders from above.

In the Sonic the Hedgehog comic series and its spin-offs published by IDW Publishing, the Grabbers are Badniks from another dimension set in the recent past, where they were created by Dr. Eggman.

With the announcement of Sonic Generations, Jazwares had made figures of the character from the Sonic series into figures. The characters would include a little figure with the package. A Grabber was included with a Classic Tails figure. 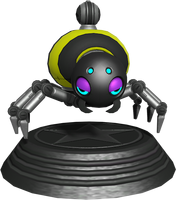