The Golem Djinn, from Sonic and the Secret Rings.

Towering mechanical enemies whose weak point is their head - if you can reach it.

The Golem Djinn[1] (ゴーレム・ジン[2], Gōremu jin?) is an enemy that appears in Sonic and the Secret Rings. It is a giant mechanical djinn breed originating from the world of the Arabian Nights and some of the Erazor Djinn's henchmen.

The Golem Djinns are the largest of all djinn; about three times bigger than Sonic himself. They are basically mechanical golems, their bodies being composed various blocky metal segments and gears held together by Grind Rails and core segments, giving them a very square-shaped appearance. Their left hand looks like a mitten while their right hand look like a claw, and their ripple-like waist resemble a ribcage. Additionally, they have a red gem in their chest and a mechanical cylinder-shaped head with two red eyes.

The Golem Djinns are seemingly diverse in origin, but they all share the common characteristic of being driven to madness during the events of the game. Some were seemingly regular inhabitants,[3] others were evil spirits sealed away long ago by King Solomon,[4] and more were created by the Erazor Djinn from the words he carved out of the Arabian Nights.[5][6] The last two of these origins seems the most plausible, as Shahra had never encountered them before.

The Golem Djinns appear exclusively Evil Foundry. In gameplay, they usually only walk around slowly. Some of them hold explosive barrels which they can throw at Sonic, however. The Golem Djinns' only vulnerable spot are their heads, which only have to get hit once to defeat them. When defeated, they release Pearls and their bodies fall to the ground, stretched out, forming Grind Rails for Sonic to grind on. However, their huge height means that Sonic must get to higher ground before using a Homing Attack on them or knock an explosive barrel into them.

Due to their size, the Golem Djinns have heavily durable bodies, their only weak spot being on their heads. 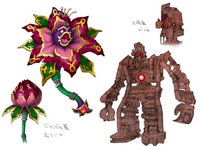