Golems[1] are supernatural fire-beasts conjured and controlled by Iblis out of the Flames of Disaster, and later by Solaris. They serve as one of the strongest opponents in Sonic the Hedgehog (2006).

The Golems are large humanoid giants made entirely of lava, with cooled rock encasing their limbs like armor. They have extra large upper torsos, arms and hands with rock armor encasing their hands, wrists, shoulders, torso and their almost minuscule neckless heads. In particular, their armor is spiked on the wrists and back. They also have rock armor around their feet and lower legs resembling boots, with additional rock armor creeping up their left hip.

The Golem is one of the most powerful enemies in Sonic the Hedgehog (2006). In gameplay, they possess two attacks―they can throw large lava balls at the player, or smash their fists into the ground to create small shockwaves.

The Golem's armor can deflect any lesser attacks, such as the Chaos Spear, Psycho Shock, Psycho Burst and Psycho Smash, so only moves like direct Homing Attacks, Bound Jumps, Chaos Attacks and thrown objects with Psychokinesis can damage them. However, the Golems have a weak spot on their head. Occasionally, they will open their "skulls" to reveal a glowing core, rendering them vulnerable to lesser attacks and being stunned when attacked. A Golem can take four hits before it is destroyed, after which they release Light Cores, but only requires half as many when attacking their weak spot directly.

Occasionally, a Golem's command system is linked to the lesser members of its kind, allowing them to commandeer them. At the same time, should the Golem be destroyed, all of its underlings will fall.[2] There are rarely more than one of them in each location, and they usually appear after the weaker enemies nearby have been destroyed.

Like all of Iblis' minions, Golems are completely mindless and only exist to cause destruction wherever they are.

The Golems are arguably the toughest monsters conjured up by Iblis. They are coated in incredibly tough armor that can withstand many forms of attack, and are physically strong enough to create dangerous shockwaves by punching into the ground. They also have limited pyrokinetic abilities that let them manifest large, spiked lava balls which they can throw at their enemies. 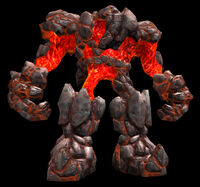 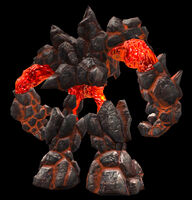 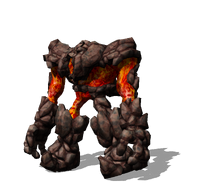 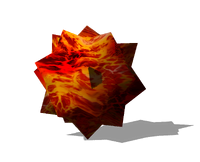