Go! Mine Cart Race is a minigame that appears in the Party Mode gameplay on the Wii video game, Sonic and the Secret Rings.

Hold the Wii Remote in vertical position and move it up and down to pull the lever on the minecart to move faster.

The players are each riding a mine cart, all of which follow the same path. The objective is reach the goal as quickly as possible, avoiding obstacles along the way. Green coins are also placed in the minigame. The first player that reaches the finish line is the winner of the minigame. 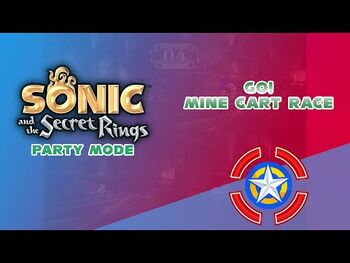