Globotron, from the Nintendo DS version of Sonic Colors.

A 'Welcome!' sign modelled on a terrestrial globe that transforms into a killer robot.

With its long lanky arms, it will ball up its fists and smash them down on the ground to create a massive shock wave. Sonic must strike its hands after it attacks to deal damage to Globotron. It is still dangerous even when damaged and will escape the middle of the battle field to chase Sonic. It then chains together a combo of two palm slaps and a double fist smash on the ground, dealing major damage. It will pause after the double fist smash, giving more opportunities for attacks against it. If Sonic scores enough hits Globotron will get dizzy and the stage will be illuminated by red lights as alarms sound off, it will then fall on the ground exposing its true weak spot; a golden colored Eggman head. If the player does not attack the head, Globotron will bounce back up and continue to attack Sonic faster than it had before. After destroying the Eggman head, a massive explosion will destroy Globotron.

An alternative, and easier, way to defeat Globotron is to strike its fist with a boost. This will release a Red Wisp, allow Sonic to use Burst to go up to the top screen and damage Globotron severely. However, this only works after encountering the Red Wisp on Sweet Mountain. 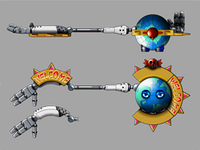