The Gizoid Guardian is an enemy that appears in Sonic Chronicles: The Dark Brotherhood. It is a Gizoid model created and deployed by the Nocturnus Clan. They serve as the elite bodyguards of Imperator Ix.

The Gizoid Guardians' design are very different from the regular known Gizoid models. The Gizoid Guardians are at least twice the size of an regular Gizoid and are much more bulky, standing with a wide chest area and abdomen, broad shoulders and large arms. Only their heads are very much the same as a regular Gizoid, except the fin plates on their heads are much larger. They have a single, wide wheel in place of their feet, and are carrying a massive pole-arm around which they use to attack.

The Gizoid Guardians' basic attack is striking the opponent with their spear. Their POW moves are Immunity and Crippling Arc, which can inflict Weaken. 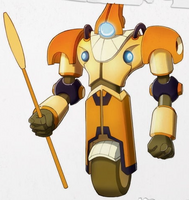