A Gizoid Centurion with its shield active, from Sonic Chronicles: The Dark Brotherhood.

The Gizoid Centurion (ギゾイド・センチュリオン, Gizoido Senchurion?) is an enemy that appears in Sonic Chronicles: The Dark Brotherhood. It is a Gizoid model created and deployed by the Nocturnus Clan. Upgraded forms of the standard Gizoid soldiers, they serve as the elite guardians of the Nocturne.

The Gizoid Centurions look just like regular Gizoids encountered in the game, with some minor differences. It strongly resembles Emerl, with the only significant physical differences being the fin plate on its forehead, which is shaped like a four-pointed star with a split in the top spike, a chest plate, and that it is seen carrying a handheld energy blade.

In comparison to the other regular Gizoid models encountered in the game, the Gizoid Centurion is slightly darker in color and has a sparkling immunity circle around it.

The Gizoid Centurions are the elite guardians of the Nocturne and are both more advanced and far stronger than the standard Gizoid models. 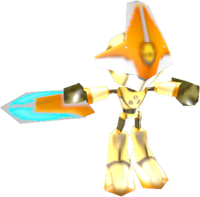