A mountainous region of ruins where legends about star shards are kept.

Plummet from the peak of the mountains where the shooting star legends were born.

Gigan Rocks is a course in Sonic Riders: Zero Gravity.

The Gigan Rocks is set at a mountainous region of an East Asian-inspired civilization near ancient ruins. The area contains ancient ruins that are built on and in the mountain.

With Sonic, Tails and Knuckles having caught up with Amy at Aquatic Capital, they saw her with a broken SCR-HD. Amy recalled Storm grabbing an Ark of the Cosmos that matched something they found earlier at a "Gigan" location, which Knuckles confirming it to be the Gigan Rocks. The heroes were then intent on visiting the Gigan Rocks to learn more about the Arks of the Cosmos with Knuckles leading the way.

The course starts with two large jumps, the first one having shortcuts for every type leading off of it (the Bike/Wheel and Grind shortcuts are accessed through the left and right Wall-Route off from the first jump respectively). After these jumps, a turn leads to a cave, with yet another jump, that takes the racers inside the mountain.

Once landing inside the mountain, there's a barricaded shortcut filled with pots for Bike and Wheel gears and the course's only Spring shortcut if the character is on-foot or under the effect of Attack. After a turn, the player must go to a stretch of course that rises as the racers ride on it until it's going straight up (this is the best time to use Gravity Dive). At the top of the stretch is another jump. The racers land outside near another barricaded shortcut. There are also grind and air ride shortcuts, but the latter can only be accessed if another character in front has created a slipstream path. There's also another shortcut that can be access via the same slipstream path that can be used by any gear type. After a sharp-turn that can be avoided if the racer used any of the shortcuts mentioned, there is a quick stretch of land that leads to the finish line.

In the Sonic the Hedgehog comic series and its spin-offs published by Archie Comics, there is a location based on the Gigan Rocks on Mobius named the "Gigan Mountains". Jet, Wave and Storm visited this location to get the Key to Babylon Garden. 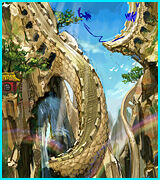 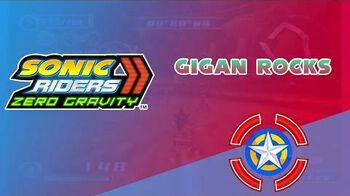