The Giant Walker[1] is a character that appears in the Sonic the Hedgehog series. It is an unidentified being that rests in an underground area underneath Cryptic Castle.

The Giant Walker appears to be of mysterious origin, as neither Dr. Eggman nor Amy seem to know what it is or why it is there. Eggman in particular was not even aware of the underground area where the Giant Walker resided.

The Giant Walker is a giant, skeleton-like creature with blue flames surrounding its face.

The Giant Walker appears at the end of the Normal mission's path of Cryptic Castle in Shadow the Hedgehog. It is immune to damage and cannot be destroyed. It chases Shadow down a set of three Grind Rails. In order to escape from it, Shadow must perform Crouches or use the Dash Rings to stay ahead of the Giant Walker. The first Dash Ring is located on the left rail and the second is on the right rail. However, if the Giant Walker catches up to and touches Shadow, he falls off the rails and the player will lose a life.

Despite its size, the Giant Walker is quite fast, easily keeping up with Shadow's grinding speed. Due to its size, it also possesses incredible physical strength. 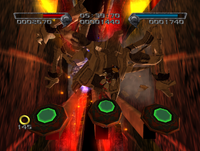