The Giant Switch[1] is a gimmick that appears in Sonic Heroes. Essentially, it is a cross between a Switch and a manual platform that can help the player reach higher locations.

The Giant Switch is a large orange and gray trapezoidal prism with tracks on the side and a long cannon on the front. On top of it is a large red disc-shaped button with a blue circle containing a yellow star on its surface. 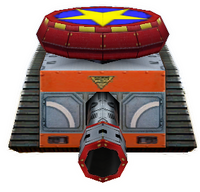