The Giant Scorpion (ジャイアントスコーピオン, Jaiantosukōpion?) is an enemy that appears in Sonic Chronicles: The Dark Brotherhood. It is a colossal type of scorpion that is a natural part of the wildlife on Earth. 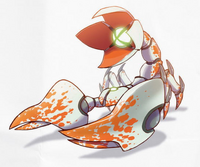