The Giant Eggman Robot facing Sonic and Tails on the Tornado, from Sonic the Hedgehog 2 (film).

The Giant Eggman Robot[1] is a vehicle that appears in the Sonic the Hedgehog film series produced by Paramount Pictures. It is a massive mech created and piloted by Dr. Robotnik.

The Giant Eggman Robot is a towering humanoid mech. It possesses a head and a torso that come together in an egg-like shape, with its head section bearing a close resemblance to Dr. Robotnik's face. Notably, its head is gray with a red top section, round eyes and wide mouth section consisting of several square sections that serve as windows into the cockpit, black and pointy eyebrows, a pointy red nose, a red neckline, and triangular black flaps attached to the nose that resemble a mustache. ON its torso it possesses red plating covering the top of its chest and its sides, as well as its lower torso, with gray and black layers of metal right underneath them and between these sections. It also has thick gray shoulders with yellow plating covering them. The aforementioned shoulder plating in particular have red edges and two downward-pointing red arrow marks on each of them. The rest of its arms consists of black elbows, gray forearms with yellow collars with gray studs around their upper section, red forearm plating, and large red hands. Its legs on the other hand consist of gray thighs, thick and red lower legs with gray ankle collars, and large red feet. Also, on its back are what appears to be three rocket exhaust holes.

The insides of the Giant Eggman Robot consists mostly of gears, lights and circuits, with the exception of its head and torso, which share a large, spacious room with a gyroscopically stable platform inside it that reaches up to the height of the head. It also possesses several ledges along the insides of its torso, as well as a secondary seat for the co-pilot, which takes the form of a spherical cockpit positioned in the nose of the mech with an instrument board in front of it.

When powered by the Master Emerald, the Giant Eggman Robot's eyes and mount glow green. When running on auxiliary power however, its eyes and mouth glow red instead.

The Giant Eggman Robot is a machine of nearly unprecedented might. It is equipped with vast offensive capabilities that include missile launchers on its front torso that can unleash barrages of missiles, destructive and explosive lasers that it can fire from its eyes, nose and knuckles, wrist-mounted flamethrowers that can unleash torrents of enduring flames, and the "'Stache Smasher", a feature where the Giant Eggman Robot clamps its mustache panels together to crush anything caught between them. To match its size, the Giant Eggman Robot is tremendously durable: even when hit by its own missiles or Knuckles' strongest attack, the Giant Eggman Robot emerged from those scrapes without any damage. Its forearms are also equipped with collapsible rocket thrusters that it can use to increase the momentum of its punches. In addition, it carries a large infantry of green and gray-armored Badniks that it can deploy in swarms from its shoulders to attack smaller enemies. It is also capable of playing music, possessing a “world domination playlist” of songs to choose from. In exchange for all its power, however, the Giant Eggman Robot is a bit heavy and slow. It also comes with a computer for operating it via voice commands.

After the toppling and destruction of the Giant Eggman Robot, G.U.N. would look through its wreckage for Robotnik, but could not find him in the debris. However, Stone had survived the Giant Eggman Robot's defeat and posed as one of the G.U.N. agents to evade capture and observe Commander Walters.

A playset by Jakks Pacific was produced which includes a toy of the robot, Green Hills' bridge and a 2.5" articulated figure of Super Sonic. The set seemingly uses early designs, as most notably the robot is primarily purple instead of red. A toy of the robot was also included in the line of McDonald's Happy Meal toys available during the promotion for the film. 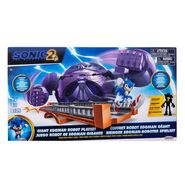 Box of the playset by Jakks Pacific 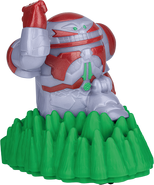