The Ghost Whale (ゴーストホーウェイル, Gōsuto Hōweiru?) is the boss of Blizzard Peaks in Sonic Rush Adventure. It was created by Dr. Eggman and Eggman Nega.

As the name states, the Ghost Whale is a giant, robotic whale. It has several hues of purple on its sides, back, and tail. It has a giant red jewel on its head, tan teeth, and green eyes. It has light-purple wheels on its side and peach colored stripes most of the places. It has yellow blowholes on its back.

In the inside of the Ghost Whale, the surface wall is brownish pink with a pattern of pink markings and is filled with red wires connected along pointy yellow arc structures.

On normal difficulty, the fish-like robots that spawn in the ice floe section come in groups of three and two (for last phase) as opposed to two and one (last phase). There are less time bonus nodes inside the Ghost Whale as well. 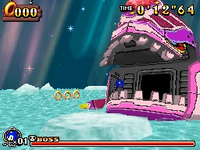