A city under siege by mass-produced Death Egg Robots.

The radar shows Eggman up ahead. Enemies could be lying in wait, so watch your step. I get the feeling that Eggman has some tricks up his sleeve.

Ghost Town (ゴーストタウン, Gōsutotaun?) is the third stage in Sonic Forces, and the first stage in the game to be played as Classic Sonic.

It features a section of the City that is under siege by the Eggman Empire's robot armies and mass-produced Death Egg Robots. It was also here that Tails met Classic Sonic during the War to Take Back the Planet.

Ghost Town is a deserted, Eggman Empire-besieged area in the City set during a partially clouded sunset. The area's densely-built buildings resemble those found in real-life cities like San Diego. Ghost Town itself is built in a blocky hill landscape with layered soil in different shades of brown and green grass on top of the hills that favors Green Hill. There is also a long red bridge in the background that stretches across a large portion of the horizon; plus the area is a coastal region.

Ghost Town shows a scenario of complete chaos and war in the background, with structures—buildings and houses, among others—being destroyed by hordes of mass-produced Death Egg Robots that roam through the City without any interference. As such, much of Ghost Town lies in ruins, with most of the local structures having suffered heavy damage and/or having been set ablaze. In addition, flaming balls of fire are falling from the sky, causing even more destruction.

Having lost his way during the War to Take Back the Planet with Sonic's disappearance six months ago, Tails finds himself in the City again, trying to repair E-123 Omega amidst the chaos in the City. While Tails thinks to himself about how he is unable to fix Omega however, he does not notice Chaos sneaking up on him after emerging from a manhole before it is too late. Cowering in fear, Tails cries for Sonic's help. As Chaos lunges its arm towards Tails however, a wormhole opens next to Chaos, and out of it comes Classic Sonic, who attacks Chaos with his Spin Attack, forcing Chaos to retreat. At first, Tails thinks he has been saved by Sonic, but soon realizes that it is actually his version from another dimension.

Seeing that Classic Sonic has no explanation for how he has arrived here, Tails theorizes that the power Dr. Eggman is using to conquer the world is somehow affecting dimensions as well. Believing Classic Sonic's reappearance to be a sign that the world needs saving, Tails regains hope and sets out with Classic Sonic to help him save the world, with their first move being to find Eggman.

While Classic Sonic makes his way through Ghost Town as the City is torn apart by mass-produced Death Egg Robots, Tails acts as his guide using his radar. Along the way however, Tails picks up a reading more powerful than the others...

Just before the first Star Post, there is an upper path that leads over much of the terrain. Should the player choose the pathway the Star Post is on however, they will pass through the sewers. Regardless, both paths will rejoin just before a corkscrew, passing right in front of a mass-produced Death Egg Robot who watches Classic Sonic pass as others can be seen in the background tearing the City apart with stomps or their extendable arms with spiked fingers, swinging them wildly with the occasional lunge into the ground as they ravage the landscape.

On the other side of the corkscrew, the path will split into a upper path across the roofs, a central route through the streets, and a lower road through the sewers. The central and lower route eventually join up with each other again a little ahead though. This reunited road then splits into two again, with the upper route connecting to the rooftop path in-between a corkscrews and a loop. The lower path on the other hand leads back to the sewers.

Should the player take the upper path, they will, after the loop, hit a downward slope that takes them through a corkscrew, which leads to the Goal Plate. Should the player take the lower path on the other hand, the road will take them through the sewers until the road joins up with the aforementioned upper path on the last stretch leading up to the Goal Plate. 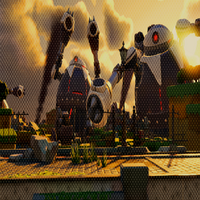