Gator[note 1] is a scrapped Badnik from Sonic the Hedgehog 2.

Gator resembles a green (though sometimes it may be colored blue) alligator-like robot on wheels. It rolls over and chomps the player during the stage. It was in Emerald Hill and Hidden Palace's Debug lists, although it is most known for its appearance in the lost Sand Shower Zone and the beta version of Mystic Cave Zone. 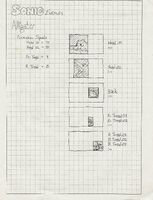 Concept of the Alligator.

Idle drawings of the Gator and an unused Pillbug, along with a sketch of Sonic.
Add a photo to this gallery