The Gatling Elite[1] is an enemy that appears in the Sonic Boom series. It is a mass-produced model of Destruction Troops created by Lyric the Last Ancient. One of Lyric's most elite warriors, they can shoot energy blasts in a berserker-like fashion.

The Gatling Elites are tall and very bulky robots with dark red armor and black joints. Possessing a massive upper torso, they have broad round shoulders with thin arms, laser cannons for forearms, long and pointy elbows, and three clawed fingers. On their chest, they have a purple eye with yellow-green sclera, a slit-like pupil and armored eyelids with an adjustable horn on top. They also have a medium-sized waist with yellow-green lines, a round pelvis, and three black legs covered in dark red armor.

The Gatling Elites are very rare enemies which are only fought a few times as small minibosses in the last levels of the game. The player encounters them in Ocean Purification Plant, Creeper Gorge, Sky Citadel and Lyric's Lair. In gameplay, the Gatling Elites have three attack methods: the first is unleashing a short-ranged shock wave around them, the second is deploying five stationary mines around itself which cause damage upon contact, and the third is shooting a rapid barrage of beams at the characters. Since most of their attacks cat hit the characters from any distance though, they do not move very often.

to instantly destroy them, during which they will shoot until they overheat and blow up. When defeated, the Gatling Elites release six Rings and a varying amount of Robot Scrap.

After Team Sonic defeated Lyric, all the Gatling Elites were subsequently scrapped.

At their core, the Gatling Elites are mindless and silent drones unwaveringly loyal to Lyric the Last Ancient, having been programmed to obey his every command.[2] Their loyalty is only superficial however, as the Gatling Elites are just soulless machines adhering to their programing, meaning their allegiance can easily shift when someone else takes control of them.

The Gatling Elites are impressively tough robots, capable of withstanding excessive amounts of damage. Equipped with energy cannons, they can project harmful green energy as either a short-ranged shockwave by releasing it into the ground or energy beams, though extensive usage of the latter will make them overheat. They can also temporarily cloak their entire bodies in a blue force field, making them invulnerable to harm. 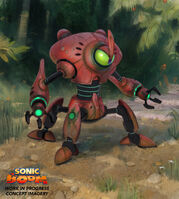